Utter the name Captain Marvel to anyone born this side of the millennium, and the first thing in their minds would probably be the comic-book superhero portrayed by Brie Larson.

To a football fan a decade or two older, however, the moniker belongs to a being more human but no less marvellous in his heyday.

Bryan Robson was the original Captain Marvel, so christened by fans of Manchester United and England for his inspirational and tenacious displays that helped his club win their first league title in 26 years in 1993, ushering in an era of unprecedented success.

The arrival of the movie character has stolen some of his thunder.

"My six-year-old grandson finds it very strange when I walk down the street with them sometimes and people shout, 'Hey Captain Marvel', and he thinks I'm some sort of superhero nowadays," Robson told AsiaOne.

The 62-year-old was appearing at a meet-and-greet event on July 19 at MSpace at Maybank, the bank's one-of-a-kind lifestyle branch, where he posed for pictures with and autographed for nearly 100 fans. 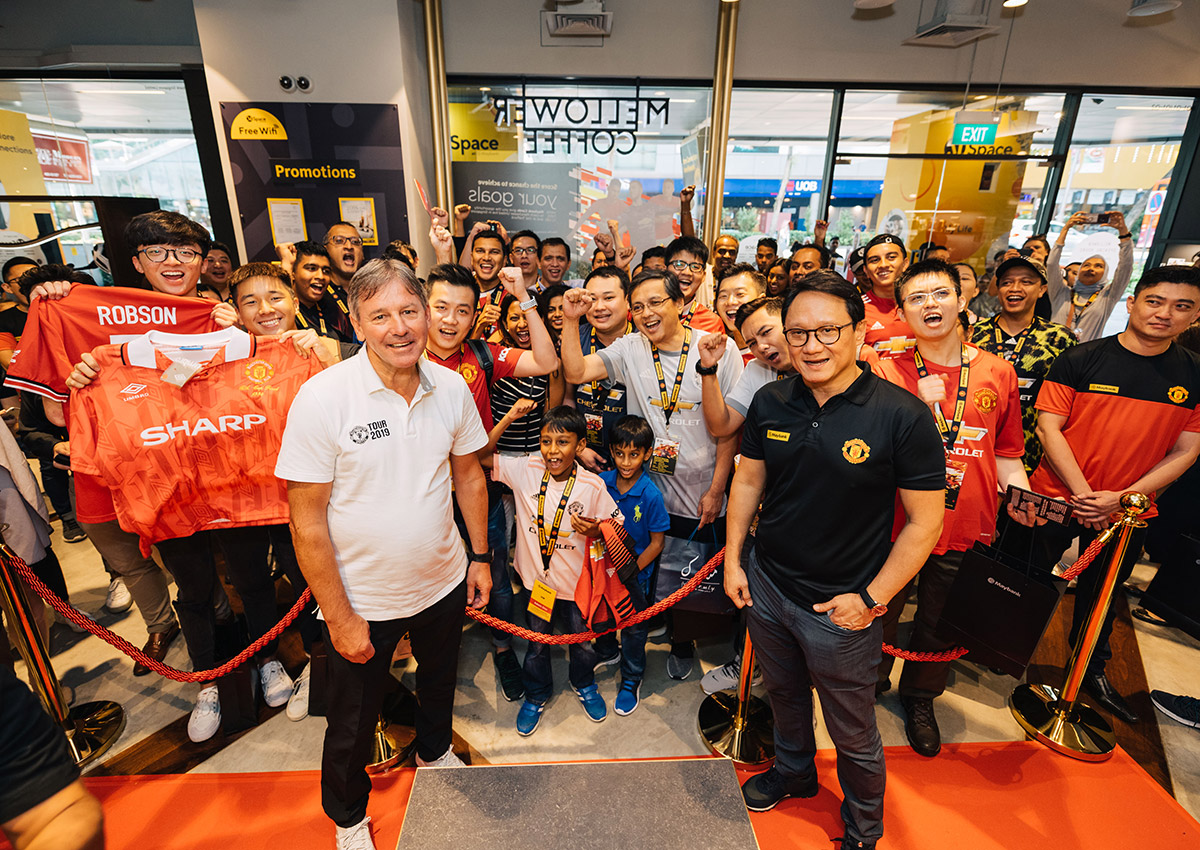 Located at Orchard Shopping Centre, MSpace at Maybank boasts a Mellower Coffee cafe and a private lounge on the mezzanine level where Maybank's Premier and Private clients can relax in comfort.

Interestingly, Robson has not seen Larson's Captain Marvel, who appeared in the two highest-grossing movies this year, and only knew about her through his grandkids.

The United ambassador is in Singapore with the team, who are here to compete in the sold-out International Champions Cup friendly match with Italy's Inter Milan on July 20.

One fan grateful for the opportunity to meet Robson at MSpace at Maybank on Friday was Wilson Noel George.

"I loved the event. Just to meet my legend, Bryan Robson. It's because of him that I'm a United fan," said the 53-year-old. "No words can describe. Priceless." 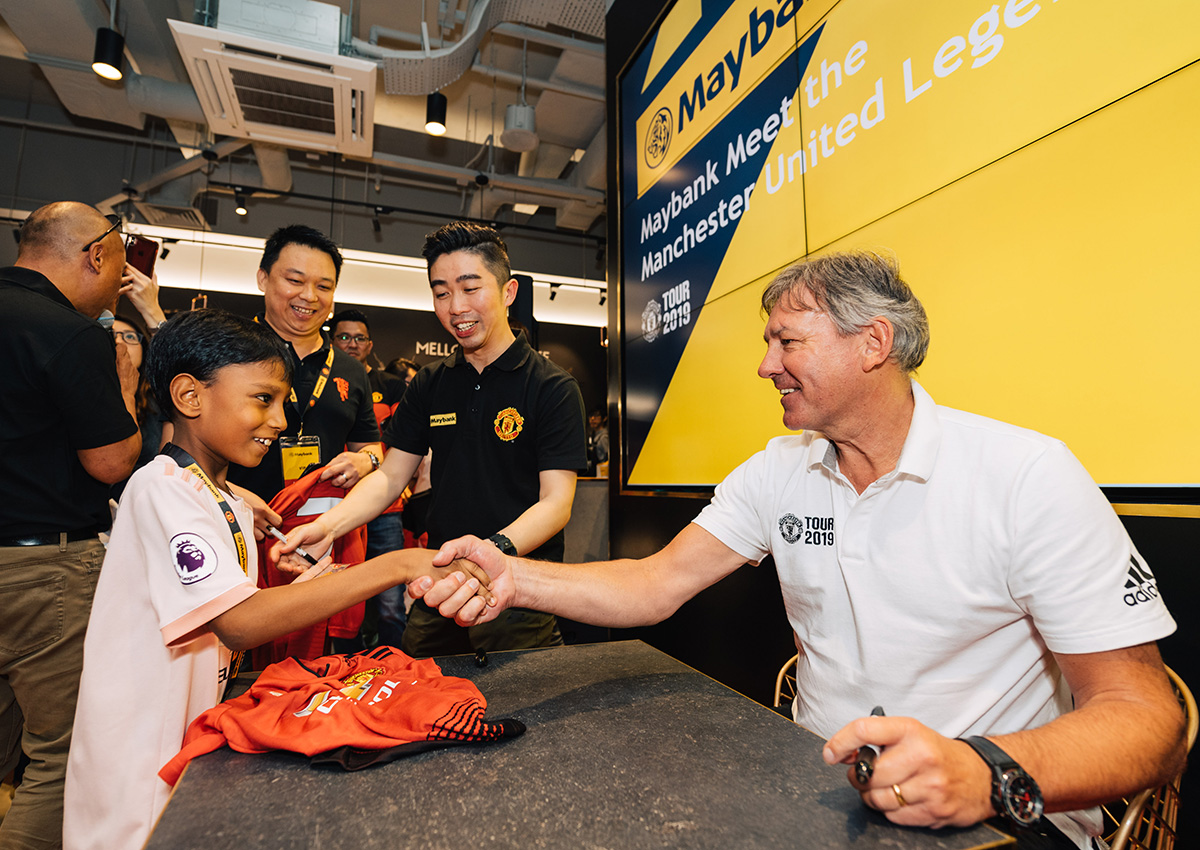 Alvin Lee, the bank's Head of Community Financial Services Singapore and Group Wealth Management, said of working with the Red Devils: "To keep up with growth momentum, we have to establish strategic partnerships with brands which are complementary to what Maybank can offer, so that we can broaden our relevance and deliver what we think our customers need now, as well as in the future.

"The shared trust established throughout our partnership has helped us work together as one, to find innovative ways to offer greater opportunities and benefits for our customers."

STRONG CHARACTERS IN THE DRESSING ROOM

In his prime, Robson galvanised teammates with both his footballing and leadership abilities.

He is United's longest-serving captain and his country's third.

Leadership within the squad has been an issue in recent years, however. Fans and pundits have attributed some of the club's struggles to a lack of strong characters in the mould of Wayne Rooney and Rio Ferdinand.

Captain Marvel does not disagree.

Said Robson: "When I talk to some of the lads, when you have a cup of coffee or something with them after training, I always say that some players in our squad could do a lot better on the communication side, order each other about so then you're organised.

"There's quite a lot of our players that know the game really well but could do a lot better with the team just by urging them on and trying to make them better players." 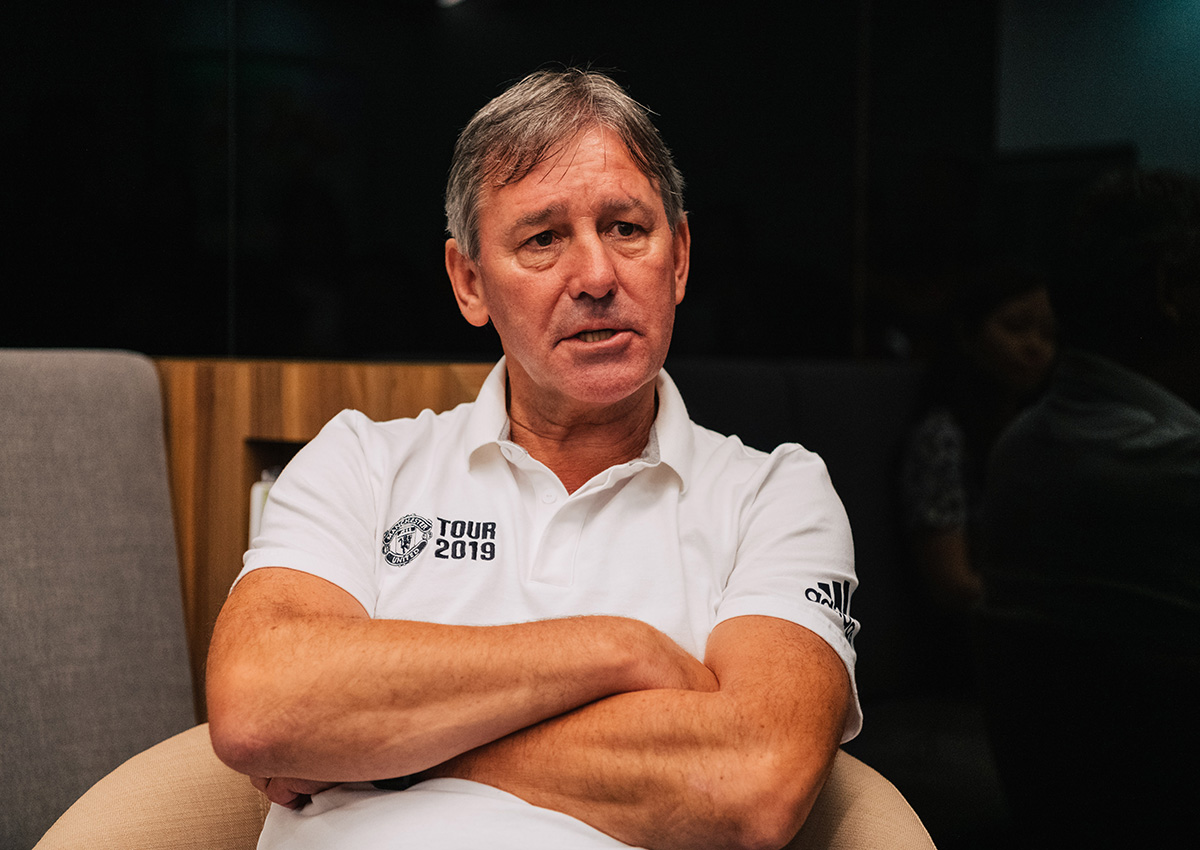 United's captaincy is currently vacant after the departure of Antonio Valencia and Robson offered some suggestions.

"Chris Smalling, Phil Jones. These are lads who got a lot of experience and you know they have got it in them to be captain."

He also seemed to agree with manager Ole Gunnar Solskjaer's recent remark wishing the current team boasted someone like Robson.

"With the money the players earn today, I wish I could play for them," he joked.

But the former coach of Thailand cannot, and hopes that the third-richest football club in the world can sign a central defender and a central midfielder before the Aug 8 transfer deadline.

Names that have been thrown up include Leicester City's Harry Maguire, Newcastle United's Sean Longstaff and Sporting CP's Bruno Fernandes.

One player Robson wishes would not be part of transfer discussions is wantaway superstar Paul Pogba. He has praised the Frenchman for his work during this pre-season tour.

"I don't want to see any of our best players leaving the football club. I think we've got to build around those players and make us better." 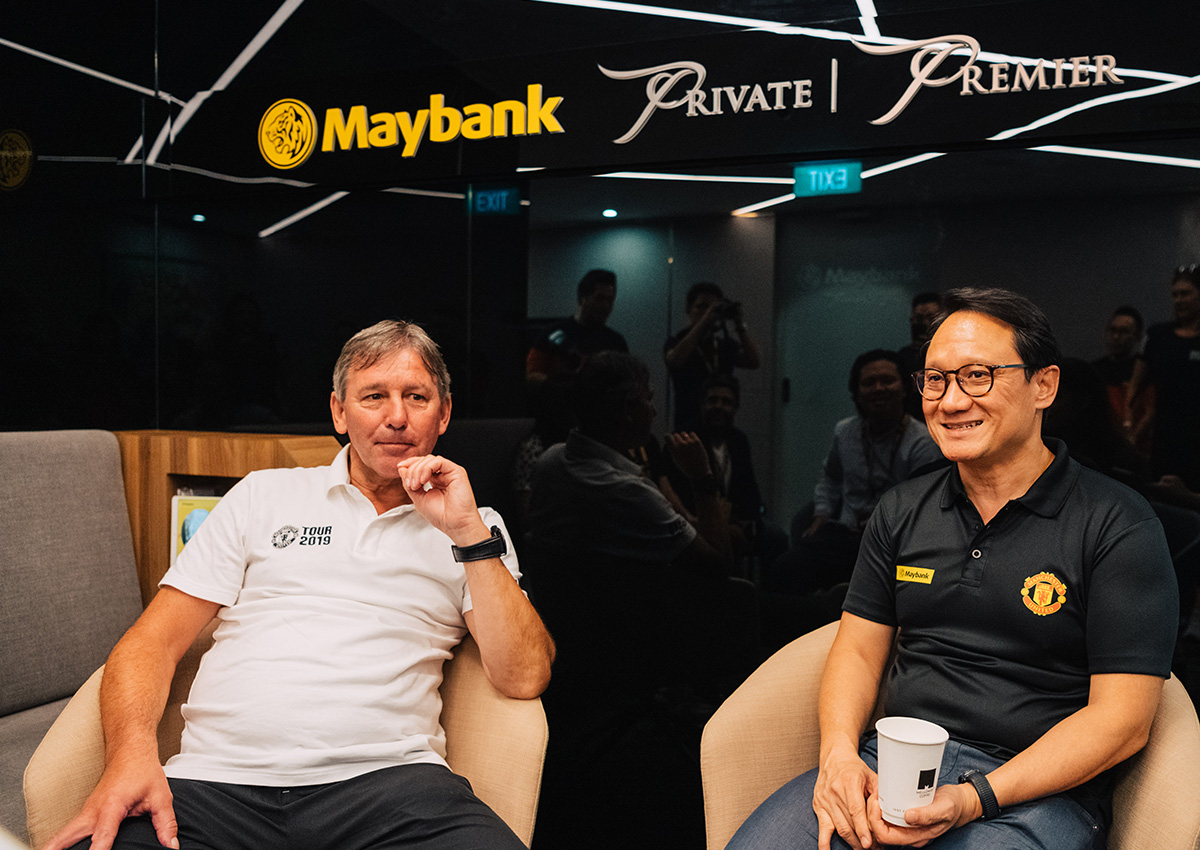 But Robson has strong advice for footballers today who spend too much time on social media.

Pogba and teammate Jesse Lingard have been criticised for their social-media antics even as United struggled.

"I think the fans like to see the players get involved on social media but I think players have got to be very careful when they go on social media because they've got to remember, they are footballers first, that's why a lot of people follow them on social media. I never liked to see players on it too much."

Robson hailed from a simpler generation.

He recalled how in the 1980s, United's training ground consisted of one field.

Today, the facility has "25 pitches with floodlights and heating".

But simpler did not mean footballers then were inferior, he was quick to add.

"Definitely" was his reply when asked if he would be as good in today's game.

With so many engagements in the short span of time he has here, Robson confessed that he would not be able to enjoy the city.

Asked if he has any plans while in Singapore, he joked again: "Work for Maybank."

At least he is sure to be well taken care of at MSpace at Maybank, launched last November to service the banking needs of a diverse group, from millennials to high-end clients.

The Mellower Coffee branch here serves drinks unique to the outlet, and free workshops are regularly organised together with experts for customers and the public.

“This branch was newly created to appeal to people from all walks of life. They come here not just for banking; they can come for a cup of coffee and just socialise, and we have a tablet app for them to surf and from here, they learn more about us and our solutions,” Lee said.

This article is brought to you in partnership with Maybank. Check out the Maybank Manchester United Platinum Visa Card here.

#Maybank #football #Marvel #In Case You Missed It