A resident points out where they found the 'mystery packages'.

The Jalan Besar Town Council told AsiaOne it has cleaned up and disinfected the affected areas each time upon receiving feedback from residents in February.

It is currently working with the police and the National Environment Agency to resolve the matter. In the meantime, advisories have also been placed around the area to deter residents from literring.

"We urge residents to spare a thought for their neighbours and their living environment and refrain from such inconsiderate acts," the town council added.

Residents living on the lower levels of an HDB block along Jalan Klinik found several foul-smelling 'mystery parcels' outside their windows over the past three months, only to realise they were actually wrapped balls of faecal matter.

In an interview with Lianhe Wanbao, a resident living in a flat on the ground floor recalled facing this issue as early as January this year. The 75-year-old had caught a whiff of a stench wafting into her home one afternoon, so she went out to investigate.

"I found a ball of tissue in front of my door, and it turned out to contain a piece of s***!"

A 43-year-old who lives on the second floor told the Chinese evening daily that she, too, found these unwanted surprises in her service yard after an odour in the house left her nauseated.

"It's so scary that someone would throw their faeces," she bemoaned. "Since then, I've never dared to hang my laundry there."

The residents said they tried to close an eye to the dumping, but the litterbug persisted and at a point in time, had thrown their excrement out the window for seven days straight.

The littering temporarily stopped after a police report was lodged in January, but the litterbug resumed their activities again in March.

"This is too much, whoever it is they better stop," the elderly resident said. 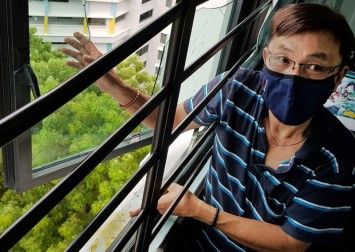 Residents on the third floor have not been spared either.

A 62-year-old resident said she picked up a bed sheet that had fallen outside her unit last February. She collected it, thinking that someone would come to claim it, but she noticed a funky smell permeating her house in the next couple of days.

Only then did she discover that the bedsheet was covered in waste and immediately disposed of it.

Under the Environmental Public Health Act, those guilty of high-rise littering offences may be fined up to $2,000 for each littering act for the first court conviction, $4,000 for the second and $10,000 for the third or subsequent convction.

AsiaOne has reached out to Jalan Besar Town Council and the police for more information.