A woman in Bukit Panjang claims to have been suffering from second-hand smoke for 20 years from the unit below hers, Shin Min Daily News reported on Thursday (July 1).

The 52-year-old self-employed woman – who lives on the ninth floor of Block 241 Bukit Panjang Ring Road – would take note the number of times said neighbour started smoking in a two week span starting from June 17.

The detailed notes include dates, timings as well as specific areas where she caught a whiff of smoke. The result: more than 150 times, almost 12 to 16 times daily.

When the old neighbours had moved out, the woman thought she could catch a break, however her new neighbours turned out to be heavier smokers.

Previously, only her kitchen would be stained with the smell of smoke but now, the smell would reach the windows and even the toilets.

Her other neighbour – who lived on the same floor – commented that there were cigarette butts littered in the corridor, causing the smell to be even more pungent, according to Chinese daily.

The woman shared that she tried closing her windows but complained that the heat was intolerable.

She attempted to speak with her downstairs neighbours, however, they curtly said that smoking at home is permitted and told her to file a complaint to the authorities.

The woman claimed that she had lost weight drastically, about four to five kilograms within two months, due to the effects of secondhand smoke. She currently weighs in at 34kg. 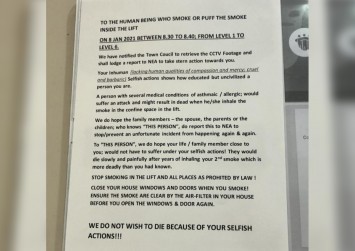 She also stated that she lives with her 75-year-old mother who is also frequently bothered by the cigarette smoke and smell, which causes sore throats and congested noses.

In response to the Chinese daily queries, the Holland-Bukit Panjang Town Council said it will collaborate with the National Environmental Agency (NEA), HDB, grassroot organisations, and citizens to enhance the estate's cleanliness.

Residents were also encouraged by the town council not to smoke near windows or balconies, and to think about others who are non-smokers.

Due to the increasing complaints of secondhand smoke, two designated smoking cabins were launched on June 30 and have been built up in public housing estates in Clementi, located specifically at Clementi Ridges and Trivelis.

Each unit may only hold up to four individuals, and users must check in using the TraceTogether app.

In early October last year, Member of Parliament Louis Ng had called out for a ban on smoking near windows or balconies at home, pointing out that second-hand smoke could kill.