'Bullied' over $8 sticker? Woman says she was confronted by printing company over 1-star review

Without the luxury of big advertising budgets, it is expected that online reviews are important to small businesses.

One customer of a printing service, however, did not expect to get "Pokemon-battled" after she posted a negative one-star review of their business on Google.

The customer, Jude Lim, shared with AsiaOne about her disappointing experience with local printing business Myouki, whom she contacted through Carousell.

Lim, 33, who works as a video producer as well as a graphic designer, added that it's the first time she had chosen to engage a local company to print her work – a sheet of stickers.

"What [was] seen to be an effort to help a local company turned into the worst experience I have ever dealt with," shared Lim in a Google review.

After a brief conversation on the requirements of the printout, Lim paid $8 for the single sheet of stickers. That was on Nov 14.

Lim shared, however, that she did not receive any updates after that until she asked them about it five days later.

According to Lim, their response was "I check", before they fell silent.

Several days later on Nov 22, Lim checked in again on when she can collect the stickers.

After an initial "hello" followed by silence, she was simply told, "Haven't come to you" and "wait a while more".

Finally on Nov 28, Lim contacted them again, questioning them about the delay.

It was then that they responded to say the team could have "overlooked and didn't inform you about the collection".

"I think as a business you should at least give updates... only on my third message they decided to do it that day because I didn't sound very happy," Lim told AsiaOne.

The person behind the account on WhatsApp told her that she could collect the item the same day from a residential unit in Punggol.

When Lim arrived to pick up the sticker, however, she was dismayed to find that the paper was left on top of a bicycle and that the plastic packaging had a hole in it so the printout was "exposed to the weather".

"It really was just one sheet on the back of a bike," said Lim, adding that it had been raining that day.

She also claimed that the "quality was also not as good as expected".

Speaking to AsiaOne, Lim said she was mainly unhappy with the service provided as well as the "rudeness" displayed, which was why she decided to post a review several days later.

What she didn't expect though, was the proprietor of Miyouki to clap back with an equally biting response.

'You have to work on your artwork'

In their reply posted on Tuesday (Nov 29), the person believed to be one of the business owners commented rather cryptically that Lim should not feel sorry about leaving a negative review.

"Don’t be sorry to leave a review. We should feel honoured. Cause we can understand your point of view and we can learn too," they wrote.

They also claimed to have apologised in the text to Lim and added that Lim should have called them rather than relied on text messaging.

"Sometimes, you can just call us. Will receive a more prompt reply. Chats get override very easily."

To this, Lim shared: "In the end it became my fault for not calling them." She also alleged that other one-star reviews by other customers were similarly picked apart by the owner of the business.

Perhaps more scathing was the owner's insinuation that the quality of the printout was dissatisfactory due to Lim's own doing.

"Regarding your artwork, if you find the print not satisfactory, you have to work on your artwork. We only print what you sent," they noted, while at the same time expressing unhappiness over not being contacted privately about the complaint.

But it didn't end there.

Are we bullying you?

Lim was flabbergasted when she was contacted by the owner on WhatsApp the same day, to confront her over the bad review.

Again, the owner took issue over allegations about the poor quality printout.

Lim, who told AsiaOne that she has experience in the printing business, hit back, stating, "please do not try to bully me over the review.. working with PDF and AI (Adobe illustrator) is my profession and it's clear you lack experience".

The owner however, highlighted that reviews are especially important for businesses such as theirs.

"You can go around paying $8 and leave negative feedback but nothing will happen to you. But your feedback stays with us and you say we are bullying you? Are you okay?" the owner wrote, before adding, "Just one sticker, make such a big hoo-ha."

Their rant descended into a series of "insults", Lim alleged.

The kicker included the owner wishing Lim well, "mentally", with them leaving a remark, "Of course, we wish you well mentally also, feel so much for you."

In a TikTok posted of the conversation, Lim shared, "This company is just bad at PR that it's funny."

When contacted over WhatsApp, the person behind the account told AsiaOne that they did not confront Lim, but shared that they'd "approached her to know the reason behind her review".

Asked if they were the owner of the business and if there was only one person replying to customer's texts, they replied that "We all take turns to reply. No fixed person."

The person added that Lim "was chill all the time" during their initial text conversation, but "suddenly we received a negative feedback on Google".

"I believe communication works both ways to ensure a smooth and happy shopping experience." 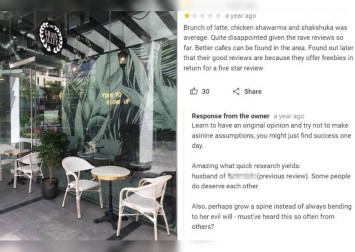 "Our intention is never to blame but to understand, learn and not repeat the same issue with the next customer."

A description on Myouki's website stated that the company was founded in 2012 selling "anything which is in demand". It expanded to offer printing services in 2017.

The company also appears to be rated highly on Google, with 4.5 stars and 4.9 stars for their two stated locations in Punggol and at Paya Lebar, where their office is believed to be located.