SINGAPORE - Ten passengers and two bus captains were taken to hospital after two buses collided with each other on Wednesday morning (Dec 26).

The Singapore Civil Defence Force said it responded to the incident, which took place along Tampines Avenue 10, at around 6.50am.

According to Chinese evening paper Shin Min Daily News, one of the buses had stopped at a bus stop when the other collided with it from behind. 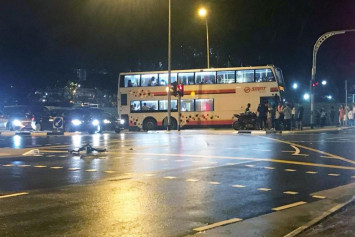 The buses involved in the accident were services 127 and 168.

Ms Tammy Tan, senior vice-president of corporate communications for SBS Transit, said that representatives from the transport company visited the injured at the two hospitals on Wednesday.

Nine of the passengers received outpatient treatment while one was placed under observation and discharged on Thursday.

Both bus captains also received outpatient treatment. One of them was suspended from driving following the incident.

Ms Tan said: "We... are already in touch with all the affected persons to render support and assistance as best we can.

"We are sorry that this has happened and are investigating the matter."