SINGAPORE - Bus and train fares could go up by up to 7 per cent next year as the Public Transport Council (PTC) begins its annual fare review exercise.

This means fares could go up by as much as 10 cents for those who pay for their journeys by card, who make up more than 90 per cent of commuters here.

This is the maximum increase that can be allowed under the current fare formula, which came into place last year and will be in place until 2022.

If approved, this would be the highest fare increase in recent years.

Public transport operators must submit their fare applications - which should not exceed the maximum quantum that can be allowed - to the PTC by Sept 23, the council said in a statement on Tuesday (Sept 3).

The PTC said that the largest contributing factor to the potential fare hike was the double-digit increase in energy prices, which rebounded 26.2 per cent in 2017, and 32.3 per cent in 2018.

The PTC noted Singapore's public transport had improved significantly over the past five years, with the introduction of more than 1,000 buses and 200 trains. 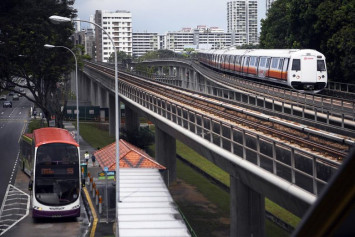 Rail reliability has also seen improvements over this period, with the MRT network hitting one million kilometres between delays, a sevenfold improvement from 2015.

While these improvements have come with an increase in the cost of operations for public transport, the council noted that average fares are now 4 to 7 cents lower than they were in 2015.

A dip in energy prices between 2015 and 2017 saw a combined 8.3 per cent reduction in fares during that time, though last year saw a 4.3 per cent increase in fares.

"Over the last five years, the gap between costs and fares has been widening. This gap has, thus far, been funded by the Government together with the rail operators," said the PTC.

The authorities will spend about $4.5 billion on the upgrading of Singapore's rail assets, and is expected to subsidise public bus services to the tune of $5 billion.

In July, Transport Minister Khaw Boon Wan said the Government is currently subsidising more than 30 per cent of public transport operations, and that higher fares are necessary to keep these subsidies in check.

The PTC said in considering the fare adjustments, it would "consider the views of commuters and relevant stakeholders, and will continue to strike a fair balance between fare affordability and the financial sustainability of the public transport system".

Special attention will be paid to concession groups such as the elderly and needy commuters, it added.

The council's decision on the fare adjustment quantum will be announced in the last quarter of this year.