Most tourist attractions that have been allowed to reopen are currently restricted to no more than 25 per cent of their operating capacity at any one time.

Businesses are realistic about the fact that Covid-19 financial support measures have to come to an end, but they are still hoping some key help will continue in the short term.

"The Government should taper off the JSS gradually in tandem with the likely slow recovery of the economy, while providing targeted support for severely affected industries," he said.

Dr Kevin Cheong, chairman of the Association of Singapore Attractions, said the rate at which the JSS is tapered off should be determined through an "equitable formula" that takes into account the maximum business capacity of an establishment amid Covid-19 curbs.

For instance, most tourist attractions that have been allowed to reopen are currently restricted to no more than 25 per cent of their operating capacity at any one time, so they should get more subsidies than those not facing such limits.

Mr Eddy Lau, executive director of the Specialists Trade Alliance of Singapore, which represents specialist contractors and suppliers in building and construction, noted that the foreign worker levy waiver was extended to December for firms in the construction sector earlier this month.

While this extension will help those in the construction sector, many of which cannot restart work, he hopes such support can be given to other firms in a similar bind.

For instance, some manufacturers mainly supply building materials like glass to construction firms, and were also impacted when construction work was slow to restart.

Deputy Prime Minister Heng Swee Keat said yesterday he will deliver a ministerial statement next Monday on how the Government will continue to support workers and businesses through the crisis.

Mr Heng said support cannot be sustained at the same level indefinitely, and schemes will evolve and taper off as more sectors reopen.

Mr Douglas Foo, president of the Singapore Manufacturing Federation, hopes to see more mental health support for workers affected by the pandemic as well as measures to enforce rental relief for tenants. "This is not forthcoming from some landlords," he said.​

Dr Cheong and Mr Sim welcomed Mr Heng's announcement that targeted support will also be provided to help hard-hit firms pivot to new opportunities. Dr Cheong called for such initiatives to be implemented in a "granular and targeted manner".

Without foreign travellers, for instance, the bulk of traffic for local attractions comes during weekends and holidays. "We have to consider how to address trends like this when we think about how we reconfigure our businesses for the resident market," he said. 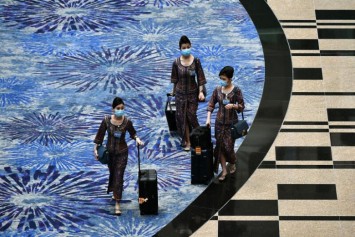 Economist Walter Theseira said some businesses in Singapore, such as domestic-facing consumer businesses and manufacturers in consumer and medical necessities, are doing fine or better than before, while others are seeing revenues that are a fraction of last year's.

Differentiating between businesses that are doing well and those that are not will be key as measures continue and evolve, he said.

"For those who aren't doing well, there needs to be a pivot in support towards restructuring and transformation," Associate Professor Theseira said, adding that he hoped to see more such measures on top of broad-based wage support.

Prof Theseira added: "I think the idea should be to protect people, whether workers or business owners, rather than just jobs, some of which are never going to be viable within the next one to two years."

Social service organisations should also get more funding as they are now helping not only the existing poor but also the "new poor", he said.

He expects Mr Heng to fund the latest round of measures with the $13 billion Contingencies Funds set aside in the Fortitude Budget in May. "We are already close to the start of the Budget process for the next financial year and I expect we'll still be dragging ourselves out of this mess in 2021."