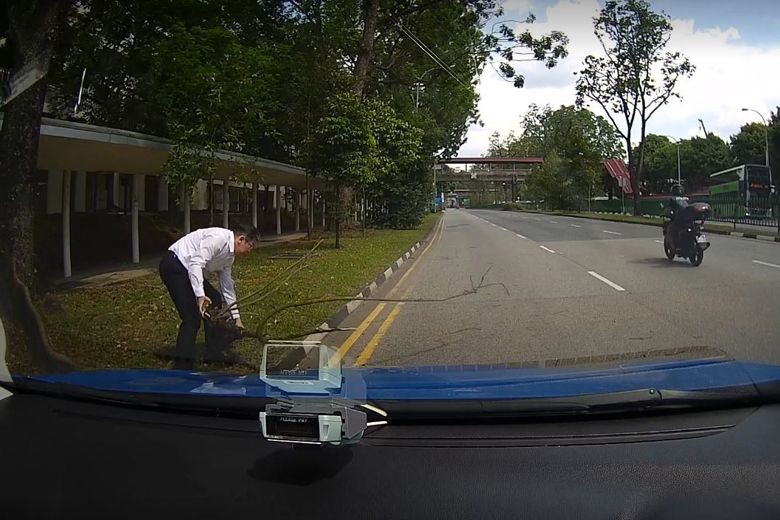 SINGAPORE - A Facebook post by a cabby about grabbing someone by the throat might seem alarming at first - until you realise that "someone" is actually a tree branch.

Taxi driver William Lee turned a near-accident into a lesson for road users, after a tree branch suddenly fell on the road he was travelling on and scratched his cab on Saturday afternoon (Oct 20).

Mr Lee, 58, posted a tongue-in-cheek account of the incident in Woodlands Avenue 2 on Facebook group Singapore Taxi Driver later that night, which quickly gained the attention of social media users.

He was travelling in the direction of the Seletar Expressway at about 2.50pm when the tree branch fell. Mr Lee said in his post, without any mention of the tree branch, that his taxi was scratched and he decided to make a U-turn to confront the "culprit".

He added that "the culprit was there mocking me, sitting by the kerb in the most disgusting manner" and that he had "grabbed the culprit by the throat".

He then threw the "culprit" back on the ground a few metres away.

Dashboard camera footage that Mr Lee uploaded with the post reveals that the "culprit" was, in fact, a fallen tree branch.

"Thank you to those who approve my actions to deal with this type who pose danger to other road users (sic)," he wrote.

Speaking to The Straits Times on Sunday, Mr Lee said that he decided to use humour in his Facebook post as a way to grab the attention of other road users.

He was hoping to spread the message of road safety and encourage motorists to think about others too while travelling on the roads.

"Taking the effort to remove possible road hazards like this tree branch is for the safety of other vulnerable road users like motorcyclists," said Mr Lee, who has been with taxi operator ComfortDelGro for about two years.

He added that if other cars went over the branch, the debris that might fly out could injure pedestrians or bystanders.

"It doesn't take much time to avert serious accidents. So I did it," he said.

He told ST that he immediately switched lanes, after he saw the tree branch fall, but was unable to avoid it in time.

His taxi was scratched on the lower left skirting as a result of the incident.

Mr Lee also advised other motorists to look out for any loose hanging branches from trees if they ever need to remove a fallen branch on the road.

"The branch (that fell on the road) felt heavy in my hand and I shudder to think what may happen if it had fallen onto someone standing under the tree," he said.

Facebook users praised Mr Lee for his actions, after they caught on to his joke.

User Billy Goaty said: "Thanks for helping to remove the fallen branches on the road and I like your dress code, smart and professional."