A cabby was caught on video hitting and pushing a female passenger to the ground in a dispute that happened at Pearl Bank Apartments on Dec 7 at about 3am.

Several Stomp contributors alerted Stomp to the video that has been circulating on WhatsApp.

After a tip-off from Stomp contributor Dan, Stomp investigated and confirmed the incident happened at the iconic residential building in Outram.

In the video, that appears to be a recording of CCTV footage, the cabby is seen pulling up at a drop-off area with a female passenger sitting in the back seat.

The cabby then exits his vehicle just before the woman does.

When she walks over to the right side of the taxi, the cabby swings his arm at her head causing her to fall onto the pavement. From the video, it is unclear if she hit him first.

He then takes the cap off of what looks to be a water bottle and splashes liquid onto her.

They continue to exchange blows and the woman is seen kicking the cabby but he retaliates by hitting and pushing her repeatedly, causing her to fall to the ground a couple more times. 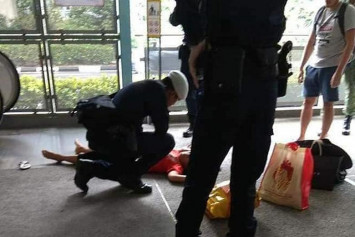 The taxi driver is then seen driving away as the woman talks to someone standing outside the video frame.

It is unclear what sparked the fight and if the cabby and passenger knew each other prior to the incident.

From the video, the word "Silvercab" can be seen on the side of the taxi.

Stomp understands the dispute was broken up by security guards at the apartment building.