SINGAPORE - Their engagement ceremony at Mount Elizabeth Hospital two weeks ago touched thousands online, and he wanted to register their marriage in January. But, he did not make it.

When contacted by The Straits Times, Dr Noel Yeo, CEO of Mount Elizabeth Hospital, expressed his deepest condolences. The hospital said it would not be commenting further out of respect for the family's wishes.

Fiancee Koh Soh Kuan and Mr Pang's family have requested for privacy in this time of mourning.

Ms Eileen Tan, who said she was by his side as he passed on, wrote in her post that she was grateful to have been involved in his life in small ways.

"Thanks for showing us how you fought for love so courageously. Thanks for reminding us that life is too precious to waste… I am honoured to have witnessed how brave you were and making every day count," she said.

She also shared that she was honoured and humbled to have been chosen to be a witness for the marriage registration, which had been scheduled for January. 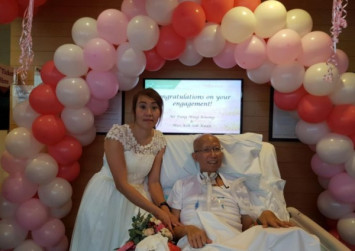 Another friend, Mr Gin Ng Khin Wee, remembered Mr Pang as an optimistic and inspirational person who encouraged him as a fellow online business operator.

"Every time when I visited him in the hospital, he would remain cheerful and smile despite how in pain or drowsy he was… I felt comfortable sitting around him and all my worries and anxiety disappeared after talking to him," he said.

ST earlier reported that 50 family members and friends witnessed his Dec 15 engagement ceremony with Ms Koh, held at the hospital where he had been warded since Nov 9.

Nurses from Mr Pang's ward had performed songs, decorated the ward, and presented the couple with flowers and balloons. They also helped Ms Koh with her make-up, and the hospital's chef had even baked a cake.

A video of the ceremony posted on ST's Facebook page has garnered over 95,000 views and more than a thousand reactions.

In an e-mail, Ms Tan told The Straits Times that friends had shared with him news of how his engagement was covered by local media.

"He was moved that many of the readers were sending him well wishes and prayers. He was also happy to know that he was spreading a message of love even in his final days," she said.

Mr Pang and Ms Koh, an executive at a reinsurance company, had been together for more than eight years. They learnt he had stage four lung cancer two years ago.

Ms Koh, 49, told ST then that they had been meeting regularly and called almost every day. He proposed to her on Nov 17.

"He always says he treasures every moment that we spend together," she said.

His wake is being held at Singapore Funeral Parlour, 91 Tampines Link until Sunday (Dec 30). The cortege will leave for Mandai Crematorium at 4.15pm.

I'll miss you Pang Ming Kwong. I was deeply saddened after knowing that you passed away 1.21am in the morning just now....