Melvin's food that was allegedly left outside a bin at Jewel.

Undelivered orders, especially food, are always a source of annoyance.

Recently, one man, who goes by the username Melvin TWJ on Facebook, complained that his $500 Shake Shack order to be delivered to him went missing.

And what's worse, he posted that he found out later that the Grab driver had allegedly left his food next to a rubbish bin at the Basement 2 carpark of Jewel.

In a detailed Facebook post on Friday (Sept 2), Melvin shared that he had placed his Shake Shack order on Aug 11 through the Grab app at around 4 pm that day.

After an arduous two-hour wait, he contacted Grab to ask about the whereabouts of his food.

To his surprise, the Grab driver claimed that the food had already been delivered, and even attached a photo as proof.

However, when Melvin checked the photo, he realised the food had not been delivered to the correct designated location.

After some investigation, he eventually discovered that the location where the driver allegedly placed his order was next to a rubbish bin in the Basement 2 carpark of Jewel Changi Airport.

Upset, Melvin said he made a report to Grab told him that they will investigate the issue and "a full refund will be made".

However, to add salt to injury, Melvin said that he was later offered a measly $50 refund over that botched $500 order.

In his post, Melvin claimed that Grab said that they are unable to return the full amount as the rider had "delivered the order to the correct address" and had "tried contacting [Melvin]".

On Aug 15, Melvin said that Grab contacted him again and explained that the Grab driver had been unable to find the correct location so the order was not delivered.

Strangely enough, a few days later, Melvin said a Grab advisor contacted him saying that the Grab driver was aware of where the correct location was but he had been unable to contact Melvin during the delivery process.

"The strange thing was that there was no chat history found on my phone at all," Melvin wrote in the post.

Once again, Melvin decided to do his own investigation – he managed to check the CCTVs in that area and through his conversations with the security guards in the area, found that no such driver had been there that day.

On Aug 28, Melvin said a Grab duty manager told him that the Grab driver was advised to either dispose of the food or place it in a safe place like the security guard post as he said he was not able to contact Melvin.

In one of the messages Melvin shared between himself and a Grab advisor on Facebook, that was part of Grab's SOP as "other jobs need to be completed as well".

On Sept 1, Melvin received a call from another Grab representative who allegedly explained that when the driver raised the concern that the food may get stolen if it was left at the security guard post, the Grab agent told him to dispose of the items since there was "no safe place" to leave them at. 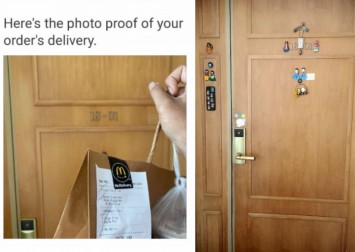 Melvin was unconvinced by this explanation.

"Why would the driver [make] a trip to the rubbish bin at basement 2 car park entrance Jewel, Changi Airport just to dispose [of] the food?" he asked.

On his Facebook post, Melvin said that he has contacted different agents "but the issue still can't be resolved".

"Therefore I'm posting this on Facebook to gain more awareness on this situation," he wrote.

AsiaOne has reached out to both Melvin and Grab for comment.

Melvin's delivery isn't the only one that has ended up in a bin.

Back in 2020, after discovering that the recipient was not home, a deliveryman threw an order of eclairs into a rubbish bin. The items were meant to be a surprise gift for a birthday girl who was not at home to receive it then.

The deliveryman had apparently tried to call her "four times within 11 minutes" as he was unable to access her via the intercom.