[UPDATE April 28] Lim told AsiaOne that he has reached a settlement with SG Auto Private Limited for $3,500.

He added that the company have paid him that amount and the two parties have officially resolved the matter.

After car dealer SG Auto Private Limited was outed by a customer last week for his used Mercedes that broke down a few hours after collection, another customer has come forward to complain that the same car dealer has been avoiding him ever since he found issues in his car that required fixing.

He subsequently paid $76,888 for the continental car.

Little did he know that almost a year on, he'd end up taking the Tampines car dealer to court and that they would owe him $4,945.50 in repairs - an amount that's still outstanding today, he said.

In an interview with AsiaOne, the 29-year-old said that he found out about SG Auto through the vehicle trading portal SgCarMart, and during the viewing of the car, he was alerted by an SG Auto salesman Alvin that the car’s moonroof lining and motor needed fixing.

In the previous AsiaOne story, an SG Auto employee named Alvin was also mentioned although it is unclear if this is the same salesman.

According to Lim, SG Auto had included in the sales agreement that they would fix these issues.

However, there would be more headaches around the corner for Lim as other parts of the car began malfunctioning.

"After taking the car [for] about two weeks, the gearbox malfunctioned and the car was not accelerating," Lim complained.

To rub salt into the wound, Lim said that Alvin started ignoring his texts on fixing the moonroof, saying that Lim "must wait".

In a text sent to Alvin on June 26, 2021, Lim said that he listed the issues that have already been fixed by the car dealer. But it seemed like the sunroof and engine cover were the two remaining items left unfixed.

He bumped this text thrice and only received a reply from Alvin some 10 days later.

"Bro I still negotiating with [the] seller. He told me he sold the car very low," Alvin replied. 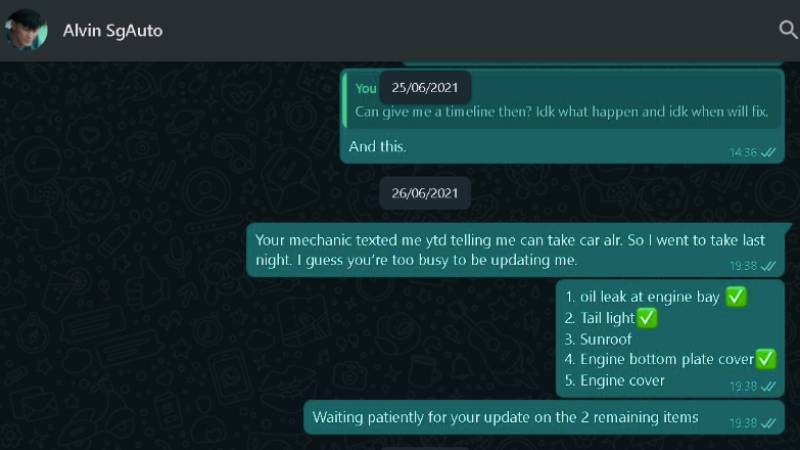 Over the next few months, Alvin would continue to evade his texts and Lim decided enough was enough.

"After four months, they still did not respond despite my multiple attempts to talk to them. I then went on to file a case at Small Claims Tribunal," Lim told AsiaOne.

SG Auto sent Alvin as a representative and he attend the first session while the second session was on Zoom.

However, he went missing for the third session.

"He did not appear for the third round of hearing, where we have actually agreed on a deal separately that they will pay half of my repair costs which is about $2,400," Lim said.

Since no representative from the car dealer showed up, the court awarded the order in Lim's favour. AsiaOne has seen a copy of the order of tribunal.

Unfortunately for Lim, his nightmare is far from over.

Lim, who is still driving the Audi today, said the car dealer has yet to pay him that amount.

AsiaOne has reached out to SG Auto for more information.

ALSO READ: Buying a used car: A guide to getting the best price