Farhan, the owner of Evolution Motors, claims that Tan had blocked his calls when he tried to contact the latter about the defective BMW.

Days after a disgruntled customer aired his grievances about receiving a defective car from a dealer, the latter has come forward to share his side of the story on Friday (Dec 9).

Tan Cheng Yong, a 27-year-old man who works in the logistics sector, told AsiaOne that he purchased a BMW E60 5 Series 523i for $112,580 from Evolution Motors in August.

During the test drive, he noticed that the car had several issues and highlighted them to car dealership owner Farhan Abdul Azis. He was told the defects would be fixed before the handover.

Over the next three months, the customer started to lose his patience after Farhan allegedly delayed his repeated requests for repairs.

"I bought a car to save time, but it ended up being not safe to drive. The inconvenience is a big hassle," Tan told AsiaOne, adding that he has since made a police report and consulted a lawyer over the matter.

I realised I was blocked: Car dealer

Speaking to AsiaOne on Friday, Farhan acknowledged that there were car defects which he intended to fix before the handover.

He added that his prior exchanges over WhatsApp with the customer had been cordial.

"I occasionally reminded him that the car needs more time to repair, which means that it'll need to be in the workshop for quite some time," he said.

However, Farhan said that Tan wanted him to "rush" the job as he urgently needed the car for work — a difficult request for him to fulfil as his workshop staff were also servicing other clients' cars. 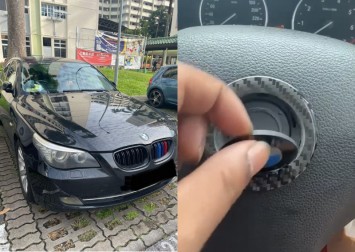 The pair did not agree on exactly how long the repairs would take, but Farhan promised he would arrange another appointment for Tan to get the remaining repairs done.

The car dealership owner added that he had tried his best to slot Tan in for urgent issues such as fixing the car's faulty aircon compressor.

Addressing the customer's complaint on not receiving the sales agreement, Farhan told AsiaOne that the delay was due to his administrative staff contracting Covid-19 and his accounting staff having "[some] backlog to clear".

"I made WhatsApp calls and phone calls to him but to no avail. When I used a different number and the call went through, I realised I was blocked."

"We will continue to reach out to him, but if all means are not fruitful, as I mentioned before, I may need to consult my lawyer."