Caught in 4K: TikToker chases down Woodlands residents, asking them to clean up Mid-Autumn Festival candles

Mid-Autumn Festival's the time for families to gather, snack on mooncakes and carry lanterns, but a TikToker found herself going after two people for celebrating the occasion in an inconsiderate manner.

On Tuesday night (Sept 22), TikTok user jszsaf posted a video that showed her chasing after a man and a woman in a public housing estate in Woodlands, asking them: "Are you going to put out the fire?"

The pair had lit a number of small candles on a public bench as part of the festivities.

"FYI I know that it’s the lantern festival. Is it so hard to be responsible? And clean up after you’ve had your fun?", the TikToker wrote.

In the video, which has since garnered over 180,000 views, the TikToker could be heard telling the man and woman that the candles were lit near a grass patch that could possibly catch fire.

However, the woman replied: "Near the grass ah, I thought I burn on the tiles what."

According to the TikTok user, an "Indian uncle" had "confronted them for placing candles on the bench", but his words fell on deaf ears as they "left without blowing the candles out".

As the TikToker followed the duo back to the bench lined with many candles, she questioned them again: "Didn't the Indian uncle scold you just now... and you didn't know how to put out the fire?" 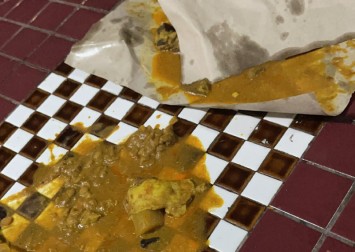 The man tried to explain himself and apologised profusely. But his companion told the TikToker several times that the flames of the candles were "small and thin".

The TikToker bit back: "Yeah, just like your brain — it's very thin and very small".

Thankfully, the pair eventually went back to blow out the candles. In the background, the Indian uncle was heard saying "Thank you" to the TikToker for holding the man and woman accountable for their actions.

Surprised by the sheer number of candles that were used, many netizens wondered if the pair were celebrating Mid-Autumn Festival or performing some sort of ritual.

Seances aside, there were also others who pointed out that leaving candle wax on the public bench could constitute vandalism:

While the Singapore Civil Defence Force did not have an advisory on the lighting of candles during Mid-Autumn Festival, it did caution the public to "avoid placing candles on grass patches and fields" as a fire safety tip during the seventh lunar month.