SINGAPORE - The chief executive of SBS Transit Downtown Line allegedly failed to give way while driving a car in February which then collided with a motorcycle.

The motorcyclist, Mr Hashim Hussein, 74, was hurt in the accident, while his pillion rider, Ms Supariyah Salamat, 68, suffered grievous hurt.

Details of their injuries were not revealed in court documents.

Alex Goei Beng Guan, 62, has been charged with two offences under the Road Traffic Act and his case was heard in a district court on Wednesday (June 23).

Shortly before the accident at about 12.15pm on Feb 5, the Singaporean was allegedly driving along a slip road of Woodlands Road towards Upper Bukit Timah Road into another slip road of Kranji Expressway towards Bukit Timah Expressway.

Goei is said to have driven "without reasonable consideration for other persons using the road" and the accident occurred. 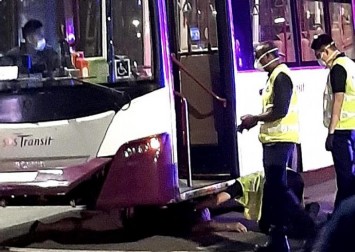 On Wednesday, The Straits Times asked SBS Transit if it will be taking any disciplinary action against him.

"This is however a personal matter and pending legal proceedings, so it is not appropriate for us to comment further."

According to SBS Transit's website, Goei first joined the firm in 1985.

It added: "From September 1998, Mr Goei was extensively involved in the bid and launch of the Sengkang Punggol LRT and North East Line, of which the latter is Singapore's first underground, driverless rail system.

"Heading traffic, passenger service and operations, he played an integral role in ensuring the successful opening of the NEL in 2003."

Goei's case has been adjourned to July 30.