These days, there are some who choose to stand by and take videos of a crime as it happens.

Ms Amberly Tan, however, is not one of those people.

Around 5pm on Friday (March 15), the 17-year-old student was at her uncle's house at Block 126A Rivervale Street when she happened to look out of the window and saw a young girl spray painting the wall of the multi-storey carpark across the road.

She took out her phone and began filming to record evidence of the incident, but then decided to take things a step further. 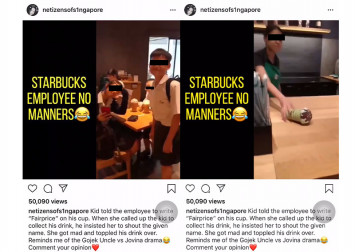 Speaking to The Straits Times on Saturday, Ms Tan said: "I felt that if I just filmed the incident and posted it online, not much action would be taken... (the culprits) would continue to vandalise and might even get emboldened to go to other places and repeat their actions.

"I hoped that I could scare them so they wouldn't do it again."

The girl, who appeared to be in the middle of spraying a word on the wall, looked up and spotted Ms Tan. She then fled the scene, leaving her can of spray paint behind.

Ms Tan said that as the girl ran, another young person wearing a hoodie and carrying a plastic bag of what appeared to be cans of spray paint approached the girl.

The pair, who according to Ms Tan appeared to be about 12 to 13 years old, spoke briefly before running away.

Ms Tan then went down to the carpark, but the pair had already disappeared.

She did, however, find a number of spray cans that they had left behind in their haste.

Her uncle, 48-year-old Mervin Choo, later returned home and called the police after he found out what had happened.

He said: "The kids might be doing this to vent their frustrations... (But) no matter what, this is still a serious offence. It also affects those in the neighbourhood."

He added that two other walls in the carpark were also covered with graffiti.

Mr Choo, who has been living in the area for almost 20 years, said this is the first time such an incident has occurred.

Ms Tan agreed with him, calling the estate "quite quiet".

"I was quite shocked that kids at such a young age would commit such a crime," she added.

The police said they received a report about the incident, which they classified as a case of mischief, at 7.48pm on Friday. They are investigating the matter.