The food centre was a ghost town yesterday, and the few stallholders that opened said they hardly had business.

Most stalls remained shuttered and there were few patrons at Chinatown Complex yesterday morning, after it reopened following a closure of 31/2 days.

The complex, which houses 700 stalls, was closed from 3pm on Sunday (Sept 12) to 11.59pm on Wednesday for cleaning and disinfection after 66 Covid-19 cases were linked to a cluster there.

The cluster has since grown to 242 cases as at yesterday. Most of the infected individuals are stallholders and assistants who work on the premises.

The food centre, a popular haunt for seniors, was a ghost town when The Straits Times visited from 10am to the early afternoon.

Only about 10 of the 260 food stalls were open for business, and hardly anyone was dining in.

People working at the few stalls that were open said there was an 80 per cent to 90 per cent drop in footfall and that it was the "most quiet" the food centre had been since the circuit breaker period last year.

At Knight's Kitchen, an Indian food stall in a corner of the food centre, the owner, Mr St Knight, said he had sold only eight packets of briyani between 8am and 1.30pm. On a typical day, he would have sold about 100 packets in that time.

The 56-year-old, sitting in front of his stall when ST approached, said he is worried about having to fork out $600 for the stall rental this month.

"People are scared to come here because of the Covid-19 cases, but I am opening my stall because I need to feed my family."

Over at Yeap Seng Handmade Pau Tim, the stall operator, who wanted to be known as Madam Lee, 68, said fewer than 20 people had visited her stall since she opened at 6.30am and the crowd was not picking up, even as lunchtime approached.

"Normally, by this time, most of the goods would be sold out, but today, not a single bao has been bought," she said, referring to the Chinese buns she sells. 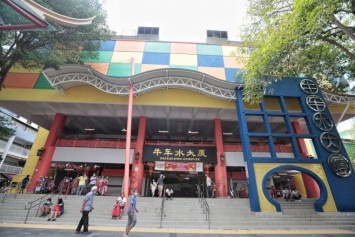 She said that as she is vaccinated, she is not too worried about getting Covid-19.

"I am more afraid that people won't come back."

Jalan Besar Town Council said it will help stallholders by waiving service and conservancy charges and temporary occupational licence fees at Chinatown Complex for the period of closure.

Said its spokesman in response to queries: "Should stallholders require any assistance, they can approach the town council and we will render assistance accordingly."

Retired businessman Jeffrey Ang, 70, who was at the food centre to get takeaway, said: "I will just buy food and leave; better not spend too long here."

On the level below the food centre, stall owners selling clothes, shoes and toys were also grim.

A shoe shop owner who wanted to be known only as Mr Ong, 68, said it will take at least a few weeks for customers to return.

"It is actually safe here because they have disinfected the place and there are not many people around. Those who returned have tested negative for the virus," he said.