City Harvest Church said its founder Kong Hee is not involved in the campaigning for any political party.

In a note to members on Wednesday (July 8), the church said it was aware of the doctored photograph being circulated on social media, which had the 55-year-old wearing a white shirt with the PAP logo digitally superimposed onto it.

The image "has been digitally altered", the church's management board clarified in the note, which was published on its website.

"Pastor Kong and City Harvest Church are not, and have never been, part of or in any way associated with any political party or institution." 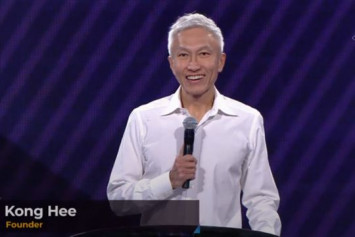 It added that Mr Kong is not involved in the campaigning for any political party during this general election, which takes place on Friday, or previous ones.

The church has since made a police report and has also asked Facebook to remove the doctored image, which is believed to have been taken last year, when Mr Kong was released from prison.

The pastor was released from jail on Aug 22 - a day before his 55th birthday - after serving time for his role in misusing millions of dollars in church funds.

His sentence was the longest among six church leaders who were involved in misappropriating about $50 million in church funds, in the largest case of misuse of charity funds in Singapore's history.

His sentence was reduced from eight years' jail to 3½ years upon appeal.

Mr Kong was released about two years and four months after he began his jail term. Inmates are usually given one-third remission on their sentence for good behaviour.