SINGAPORE - City Harvest Church founder Kong Hee turned up on Saturday (Aug 24) evening at an auditorium at Suntec Singapore Convention and Exhibition Centre for his first service since his release from Changi Prison.

Mr Kong, who turned 55 on Friday, was accompanied by his wife Ho Yeow Sun, 49.

The couple are the founders of the church, which found itself caught up in a scandal when Mr Kong and five other City Harvest Church leaders were found guilty of criminal breach of trust.

The six of them had misused $50 million in church funds for a project which involved spreading the Gospel through the secular music career of Ms Ho, who was not implicated in the case.

On Saturday, Mr Kong took to the stage about 40 minutes into the service.

He apologised for any pain, anxiety or grief that the members had suffered because of him.

"I was convicted by the court for criminal breach of trust. I have served my sentence. And today I find myself humbled," said Mr Kong, who spent 28 months behind bars for his role in the biggest case of misuse of charity funds in Singapore history.

Addressing the congregation, Mr Kong said that his immediate priority is to reconnect with his family.

He asked to be given some time to readjust back to normal life.

"I have missed out a significant part of my son's growing-up years with the long-drawn court trial and incarceration.

"My absence has also pained my parents deeply. Now that they are already in their 90s, I wish to be a filial son and take care of them," he added.

City Harvest Church founder Kong Hee was released from jail today. Here are some key facts about the largest case of misuse of charity funds in Singapore's history. http://str.sg/JZZM

Mr Kong does not hold an executive role in the church but remains as a spiritual leader.

He was sentenced to a jail term of 3 1/2 years but served just over two years behind bars. Inmates are usually given one-third remission on their sentence for good behaviour.

In 2017, the Commissioner of Charities permanently barred Mr Kong and the five other leaders from holding key management positions or being a board member in City Harvest Church or any other charity. 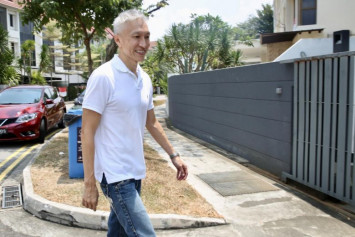 This is to protect the church's assets, given that they were convicted of offences involving dishonesty and/or deception.

Their sentences ranged from seven months to three years and two months.

He had his sentence of three years and four months extended by 13 months after he tried to flee the country a day before he was to begin serving the jail term in February last year.