Rescuers said the pair had been kayaking at a "dangerous time" as there was a fast tidal flow.

SINGAPORE - Two kayakers were involved in a dramatic rescue after capsizing near floating sea barriers off Sentosa Cove.

The man and woman, believed to be in their 30s, were left clinging to the blue barrels when their tandem kayak was apparently flipped over after being caught in a current.

Rescuers used a boat and a jet ski to pluck them from the sea. The pair - one of whom had no life vest - were told that they had been kayaking at a "dangerous time" as there was a fast tidal flow.

Mr Wade Pearce said he was driving towards One Degree 15 Marina in Sentosa Cove at around 5pm on Wednesday (Dec 2) when he noticed a commotion and spotted the capsized kayak. The 33-year-old founder of the Singapore Marine Guide boating directory called the marina, which sent a rescue boat.

"I didn't think anyone could really rescue them within a good time frame and I didn't know what the situation was - someone could be drowning," he told The Straits Times on Monday (Dec 7).

A Police Coast Guard vessel was also on the scene, but Mr Pearce said it was too big to approach the stranded kayakers.

After reaching the pair in the marina's rescue boat, Mr Pearce pulled the female kayaker from the water. Meanwhile, a jet ski operator from Sea-Doo rescued the man, who was hanging on to the floating barriers without his life vest.

A spokesman for the jet ski firm said: "He was very lucky to be able to get on to those. I'm not sure how long he was out there before we came out."

Mr Pearce added that the pair's kayak probably capsized after a current swept it up against the floating sea barriers.

"They were very calm, and they knew that they were in a situation but they did a good job of maintaining calm," he said.

He said that experienced kayakers would have avoided going there at that time as there was a fast tidal flow.

However, such distress calls have become more common in the area since the floating barriers were put up, he said.

Lucky today, we were in the right place at the right time. A tandem kayak overturned in the tidal stream outside...

The buoyant blue barrels linked by chains are meant to deter illegal entry into Singapore, and have been installed progressively off Sentosa Cove since last December. 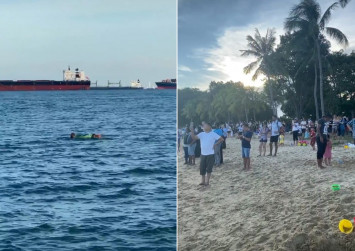 "It's a pretty notorious area at the moment for people to get caught in the currents and capsize in their kayaks, mostly because of the blue barrels installed," said Mr Pearce.

He added that the public should be more wary of the dangers at sea, noting that the channel between Sentosa and Lazarus Island can be tricky because of the currents there.

"It is one of those activities where 90 per cent know what they're doing and they do it right," he said. "But there's 10 per cent that don't understand the risk that they're putting themselves into."

This article was first published in The Straits Times. Permission required for reproduction.
#Rescue #Sentosa #Safety