Xu shared that her family had installed soundproof windows to prevent the roosters from disturbing their sleep.

How far would you go to get a good night's sleep?

One woman, fed up with roosters' crowing under her block for years, recently spent a large sum of money on soundproof windows so she'd get some peace at night.

58-year-old Xu said that the number of roosters appearing under her block along Sin Ming Avenue has increased over the past three years, Shin Min Daily News reported on Tuesday (Sept 13).

There are now more than 20 free-roaming chicken in the estate, the frustrated housewife said.

"They would fly up to the trees and crow at 2 or 3am. Closing the doors and windows didn't help [to block out the noise].

"My daughter and husband have to get up early for work, and they often can't get enough sleep."

The sleep-deprived family shelled out nearly $7,000 to install soundproof windows in two bedrooms, adding that the noise can still be heard in the living room.

Another resident, 67-year-old Liu, told Shin Min that her family had to coax her grandson back to sleep whenever the roosters crowed in the middle of the night. 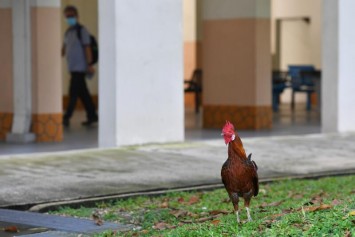 The free-roaming chickens in Sin Ming have ruffled residents' feathers for years.

While a survey conducted in June 2019 showed that 90 per cent of residents wanted the chickens to stay, the Straits Times reported that eight of them were relocated to a farm in Seletar four months later.

Another survey by the National Parks Board (NParks) in March this year found that there are 69 chickens in the estate.

Why are there more chickens now?

The growing population of chickens in the area could be due to people feeding them, one resident told the Chinese daily.

He once caught a woman in the act, the man said: "She was sprinkling rice and bread crumbs below the block, and the birds came for the food.

"It was just an isolated incident though, so I didn't interfere."

To manage the chicken population, NParks set up a task force this March. It consists of representatives from Bishan-Toa Payoh Town Council, the Animal Concerns Research and Education Society and the Sin Ming Court Residents Committee.

Signs reminding members of the public to not feed the birds are also put up in common areas.

ALSO READ: 'My children are affected by the smell': Yishun family cries fowl over neighbour rearing chickens outside HDB flat