However, enforcement of the table clearing rule begins at hawker centres as scheduled on Sept 1.

SINGAPORE - Enforcement of the rule requiring diners to clear used crockery and table litter at coffee shops and food courts has been pushed back to January next year.

To help diners adjust, there will be another advisory period, of two months, before enforcement begins at these eateries.

However, enforcement of the table clearing rule begins at hawker centres as scheduled on Wednesday (Sept 1), after a three-month advisory period. It had been announced in May that enforcement at coffee shops and foodcourts would also be introduced progressively in the fourth quarter of this year.

During the coming advisory period, from Nov 1 to Dec 31, diners will be advised to clear their trays and litter, and no enforcement action will be taken, the National Environment Agency (NEA) and Singapore Food Agency (SFA) said in a joint statement on Monday.

Those who have been reminded of the rule but still refuse to follow it after enforcement begins will have their particulars taken down, and a written warning will be issued to them. Those who still don't follow the rule will face fines.

Leaving litter behind is an offence, so remember to clear your table when you’re done with your meal at...

NEA and SFA said: "Enforcement will not be taken against those clearly unable to return their trays, such as the frail elderly or young children unable to purchase and carry their own food to the table."

Enforcement action at hawker centres has followed a similar approach. It was announced in May that it would be compulsory for diners to clear their tables and that the rule would be enforced after an advisory period.

Since then, the average tray and crockery return rate has improved to about 65 per cent, from about 30 per cent in February.

To complement existing tray and crockery return racks at hawker centres, trolleys will also be progressively introduced. They can be placed in areas with tight aisles in between existing tray return racks, to reduce walking distance. 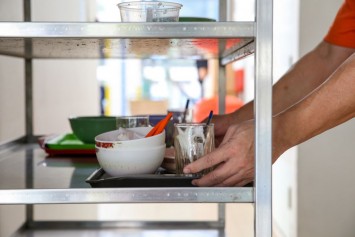 There are also another 150 new permanent tray and crockery return racks in the pipeline, in addition to the 900 existing ones at hawker centres.

Coffee shops and foodcourts are now in the midst of installing tray return infrastructure.

Enforcement action will also apply to diners at steamboat and zi char outlets within hawker centres and coffee shops.

NEA said the law applies to all diners in such eateries.

"NEA will take a pragmatic approach in situations where the stall has dedicated service staff to serve food to the table and to clear the crockery and utensils during and after the meal. Where it is unclear if the tables are served by dedicated staff, diners will be reminded to clear their dirty crockery and litter after their meals," the statement added.

The cost of cleaning services is not likely to come down immediately as cleaners are still required to maintain cleanliness by wiping and sanitising tables, it said.

"By adopting a 'self-service concept' to clear up tables after meals, diners can contribute towards alleviating the shortage of cleaners in the cleaning workforce and mitigate the upward pressure on cleaning cost over time."