SINGAPORE - Employers have been given the green light by the National Wages Council (NWC) to implement temporary wage cuts if it means saving jobs.

They should seek employees' support before doing so and only make the reductions necessary to minimise retrenchments, the tripartite group said on Friday (Oct 16) in updated guidelines that will apply from Nov 1 to June 30 next year.

The council said it did not set a quantum for the wage cuts due to the uneven impact of the Covid-19 crisis across sectors and companies but any reductions should depend on the sector and company's performance and outlook.

Employees should be told how wages will eventually be restored.

The guidelines, which are not compulsory but have been accepted by the Government, come after the council was convened in August for a second time this year.

They set out six key principles for implementing wage cuts, including employers using the annual and monthly variable components to adjust wages and that they cut basic pay only if really necessary to avoid retrenchments. Management should take earlier and deeper cuts to their wages.

The council recommended freezing wages instead of cutting them for people earning up to $1,400 a month. Cuts for those earning more than that should not leave basic monthly pay below $1,400.

This is only the fourth time since the council was formed in 1972 that it has been convened twice in a year - the last three times were also during economic crises. 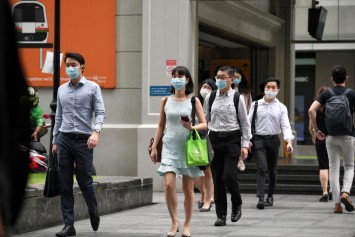 Council chairman Peter Seah said the discussions this time were more intense and took longer than the first round in March, as the issues have been very complex.

"There was a lot of give and take and very importantly a lot of trust among the tripartite partners to come up with solutions that are best not only for companies but also employees," he said at a press conference on Friday.

National Trades Union Congress president Mary Liew, an NWC member, said the labour movement agreed that there was a need to support "more drastic, immediate measures" because of the need to minimise retrenchments after efforts to retain and redeploy existing workers have been exhausted.

"Sacrifice will definitely be required on the workers' part, but we hope that employers will bear their sacrifices in mind when things get better, whenever possible recognise their efforts and reward them as well," she added.

But they recognise that retaining workers preserves firms' capabilities and enables them to be better prepared for when demand recovers for their goods and services.

"As we have managed to flatten the curve for Covid-19, we should now focus on flattening the curve for retrenchments, which increased to more than 8,000 in the second quarter of 2020," said Mr Yap.

The NWC's initial annual recommendations in March urged firms to reduce non-wage costs first, such as through focusing on training and using time banking to reduce weekly working hours without adjusting wages.

But Singapore's economy has entered a recession since then and companies are under greater pressure to retrench, noted the council, which comprises Mr Seah and 21 other members from employer groups, unions and the Government.

Mr Seah said it is hard to make a call as to when companies will emerge from the crisis, but the basic principle is that when they recover they must make every effort to restore wage cuts.

Management should have continued dialogue with workers on the subject, especially in firms that are not unionised, he added.

The council considered whether to call for a reduction in employer contributions to the Central Provident Fund but decided against this as it would disproportionately affect only local employees, noted Permanent Secretary for Manpower Aubeck Kam, who is a council member.

Cutting employer CPF contributions would also be a blunt move that would not take into account the significant variation in circumstances across sectors and firms, he added.

For the first time, the NWC made recommendations on supporting self-employed people. It said that service buyers and intermediaries should avoid cancelling projects where possible, and provide advance or timely partial payments for work done or costs incurred for projects deferred or interrupted by Covid-19.

It added that the previously agreed progressive wage model increments, which set minimum pay levels along a career and skills ladder in certain industries, are well-justified and should continue even during this time.

The council also renewed its call for employers to implement the flexible wage system of a fixed basic wage together with monthly and annual variable components, which can act as a "shock absorber" in downturns, said SNEF's Mr Yap.

Mr Kam said the system provides employees with some certainty when managing their expenses as they know how much could potentially be adjusted, while Ms Liew stressed that the system is not just for wage cuts, but also for companies to reward employees when the company performs well.

Last year, only 29.3 per cent of employees were under the flexible wage system, though in the last few years about nine in 10 private sector employees were in firms with some form of flexibility in their pay structure.

The system was first introduced in 1986, after the 1985 recession, with an annual variable component, but in 1999 after the Asian Financial Crisis the council recommended including a monthly variable component to allow businesses to react more quickly to changing business conditions.

Although the council's guidelines are not legally binding, the fact that the leadership of employer groups, unions and the Government stand behind them says something, Mr Seah noted.

"We all gather with one common objective, and if we work well together we will not only navigate the crisis well but as a country we will come out stronger. And if our economy emerges stronger it's good for everybody," he said.