CCTV footage shows the maid (left) crying after throwing a fit at the employer.

When the employer, only known as Foo, first hired a maid two years ago, she was full of praise for the 26-year-old Myanmar national’s professionalism and work ethic.

But it has all gone wrong.

The 37-year-old said she hired the domestic worker in 2019 to look after the house and care for her four children, aged between four to 13 according to Shin Min Daily News on Wednesday (Sept 8).

The restaurant manager added that when the maid did not want to take a day-off in the past two years, she gave her $20 as a form of compensation.

After discussing with her in May this year, Foo gave the domestic helper a pay increase and a weekly day-off.

“She (the maid) started to have a bad attitude towards work and would have meltdowns frequently,” she told the Chinese evening daily.

“It’s as though she’d become a completely different person.”

According to a CCTV image from Foo’s living room, it shows the frustrated maid lashing out at Foo’s six-year-old son for playing while having a meal on July 5 – with the boy seen covering his ears in fear.

Two weeks later, the maid requested to leave the household. Concerned with how it came out of the blue, Foo probed for a reason, to no avail.

“When I tried asking her to stay until the maid agency finds me a suitable replacement, she lost control of her emotions and started screaming,” she told the Chinese evening daily.

The shocked employer later discovered more CCTV footage of the maid crying while looking at her mobile phone, and more occasions of her sobbing while kneeling on the floor and murmuring to herself.

Speaking to the publication, Foo said last Sunday (Sept 5) was supposed to be the maid’s day-off. But she hid in her room, refusing to eat, drink or take a bath until later in the evening.

“It’s the same the following day. I tried to ask her if she’s feeling unwell, but she ignored me,” she said. “I’m worried that she might be suffering from depression.”

Read Also
1 compulsory day off every month for maids: MOM 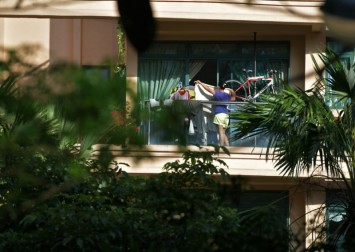 Sought help from the maid agency

Worried about the maid’s worsening emotions, Foo sought the help of her maid agency last Tuesday.

Despite speaking to the domestic helper, the agency was unable to find out the reason for her sudden behaviour change.

After advising her to eat and take a shower, they agreed to send the maid away in three days.

“Since both my husband and I are working, there’ll be no one to take care of the children when the maid is gone,'' Foo.

“The agency has said we’ll have a new helper by next month. In the meantime, I’ll consider taking leave without pay to stay at home.

AsiaOne has reached out to the Ministry of Manpower.

In 2015, a study from the Humanitarian Organisation for Migration Economics (HOME) found that approximately 24 per cent of domestic helpers in Singapore suffer from poor mental health.

Meanwhile, a 2017 study on female migrant domestic workers in Singapore – over 230,000 – revealed more than half of the 182 participants felt stressed – with nearly 20 per cent feeling isolated.

ALSO READ: Maid asked to care for 104-year-old man and share bed with him breaks down, MOM investigating