Benjamin Glynn has been in remand since his bail of $5,000 was revoked on July 19.

SINGAPORE - The British national seen in a video without a mask while riding in an MRT train in May has been convicted of all four of his charges following a trial on Wednesday (Aug 18).

Benjamin Glynn, 40, was sentenced to six weeks in jail.

District Judge Eddy Tham found Glynn guilty of two charges under the Covid-19 (Temporary Measures) Act, as well as one count each of harassment and being a public nuisance.

The judge noted that the Briton did not dispute that he had failed to wear a mask in public.

Judge Tham also said the basis for Glynn’s defence was, among other things, that there was no "contract" entered into by the Briton to be part of the regulation.

The judge added that Glynn, who claimed to be "very knowledgeable" about the law, had been "completely misguided" on the matter.

At an earlier point during the trial, one of the Briton's arresting officers testified that Glynn had resisted arrest.

Inspector Chee Xiu Quan also told the court that Glynn had said that Covid-19 was a "hoax".

Insp Chee testified that the Briton had also told the officers that the "(Covid-19) vaccine was bad for human health".

The policeman added that according to Glynn, one of the Briton's friends landed in intensive care after getting vaccinated.

Glynn, who was unrepresented, has been deemed to have no diagnosable mental disorders and fit to plead following psychiatric observation at the Institute of Mental Health.

The Briton, who had claimed to be a "sovereign" in arguing that the charges he faced did not apply to him, has been in remand since his bail of $5,000 was revoked on July 19.

He had failed to wear a mask while travelling in an MRT train some time before May 8. Glynn caused annoyance to the public during the trip by declaring: "I will never wear a mask."

On May 9, he was at the ground-level lift lobby of Allsworth Park condominium in Holland Road at around 12.30am when he used threatening words while addressing Insp Chee and Assistant Superintendent Alvin Quek Chin Han.

As he was taking his seat in the dock on Wednesday, Glynn called out to Deputy Public Prosecutor Timotheus Koh, asking if the latter had any more messages from his family.

Glynn then said: "Maybe my dead grandma has contacted you from beyond the grave."

About 10 minutes into the trial, a woman seated in the gallery was spotted with her mask off, fiddling with its straps.

When security officers inside the courtroom approached her, she said that her mask was "broken" and that they had no "contract" with her.

She refused to comply when Judge Tham asked her to leave the courtroom and exclaimed that the trial was held in a "kangaroo court".

The judge stood down the case temporarily and proceedings resumed after she was escorted out. The woman did not return for the remainder of the trial.

Insp Chee later testified on Wednesday that he had gone to Glynn's home with ASP Quek on May 9 to ascertain if the Briton was indeed the maskless man caught on the video. 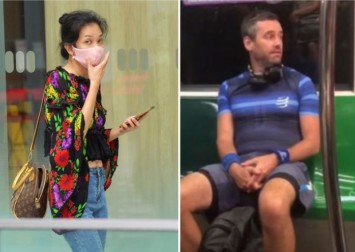 Insp Chee said that Glynn opened the door and admitted that he was the man in the clip.

The court heard that the accused also asked if they could discuss the matter downstairs at it was his daughter's birthday.

According to Insp Chee, the officers were interviewing him on the ground floor when Glynn said that Covid-19 was a "hoax".

The policeman told Judge Tham that Glynn then said he was a boxer, who could "take on" the officers. ASP Quek then stepped away to call for backup.

The court heard that the officers were about to place Glynn in handcuffs when he resisted arrest and adopted a "boxing stance" with both his fists clenched.

Insp Chee then took out his baton and told Glynn to lie on the ground.

The policeman said that he used the baton to hit the accused's thigh when the latter lunged forward.

The court heard that Glynn then ran towards the entrance of the condominium complex but turned back when a security officer at the guardhouse stepped in.

Insp Chee said they caught up with Glynn when he stumbled and he was placed in handcuffs.

Backup arrived soon after and Glynn was taken to Cantonment Police Complex. Glynn had declined to be taken to hospital and insisted that he was fine, said Insp Chee.

Glynn told the court later on Wednesday that he had had "a bit to drink" before his arrest.

He also asked Insp Chee if the officer had footage of the incident at the condominium.

Insp Chee replied that there was none as both he and ASP Quek were not in uniform at the time and were not required to don body-worn cameras.

During his cross-examination, Glynn told Senior Staff Sergeant Amirudin: "Some great investigation work there... Sherlock Holmes will be proud of you."

Judge Tham then told Glynn to not make "unnecessary comments".

Glynn also said that his arrest had been "unlawful", adding: "My defence is not based on my actions."

When queried by Glynn, Senior Staff Sgt Amirudin said that causing annoyance is an arrestable offence.

DPP Koh had urged the court on Wednesday to sentence Glynn to seven weeks' jail, stressing that the Briton had shown no remorse and had "mounted a frivolous defence".

In his oral submissions, Glynn later said that there was "a total disregard for common law in Singapore", and added: "You are not my master and I am not your slave."

Before handing down the sentence, Judge Tham said that he agreed with the prosecution, noting that Glynn had shown a "blatant disregard for the law".

For each charge under the Covid-19 (Temporary Measures) Act, an offender can be jailed for up to six months and fined up to $10,000.

If convicted of harassment, an offender can be jailed for up to a year and fined up to $5,000.