The Floravale condominium in Jurong West, where some residents have found foreign workers registered under their addresses without their knowledge.

SINGAPORE - Residents of a Jurong West condominium have found foreign workers registered under their addresses without their knowledge, and are looking for answers.

Those affected have raised concerns over being taxed for rental income despite not having rented out their units, and fear they could be on the hook if their purported tenants get in trouble with the law.

"I was shocked and confused," said Mr Ruzaidie Dar Sunik, one of The Floravale's affected residents.

"What if the person took a loan and couldn't pay it off? The police or loan sharks might come knocking at my door," said the 41-year-old senior executive in the education sector.

After being tipped off by a neighbour, he logged in to the Manpower Ministry's (MOM) Foreign Worker Tenant Enquiry Service earlier this month and found that five strangers were registered as tenants in his apartment. He has never rented out his unit.

Another resident, logistics officer Betty Koh, 45, discovered that one person had been registered under her address since March last year.

Madam Koh, who has also never rented our her home, said she knows at least 10 other affected households in The Floravale, which has about 700 units. 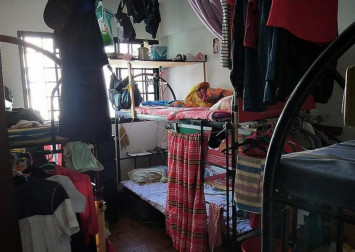 "How can people even use our addresses this way?" she said. "Even when you make bank transactions, you will get a message asking for confirmation."

In response to queries sent last week by The Straits Times, MOM said on Thursday (May 2) that the Foreign Worker Tenant Enquiry Service has not yet been fully rolled out.

A spokesman said it will implement SMS or e-mail alerts to notify home owners when a work pass holder has been registered as staying at their properties by the end of this year.

He added that since the system was soft-launched in December, 489 home owners have managed to check and report cases of misused addresses, compared to fewer than 30 every year as was previously the case.

All the employers and workers involved in the 489 cases have been, or are still being, investigated.

But one affected resident from The Floravale feels that blocking addresses is of limited use for now. Mr Han Jong Kwang had found two names listed under his address.

"But that doesn't solve the problem," said Mr Han, 54, a marine consultant. "If they can't use my address, they will simply use my neighbour's address instead."

In its statement on Thursday, MOM said it conducts regular inspections to ensure that private residential addresses declared by employers are accurate.

In a minority of cases, employers made genuine administrative errors, the ministry said.

"This was likely due to them housing their workers in overcrowded units or in unapproved factory premises," the spokesman said.

"There were also cases where workers who sourced for their own accommodation deliberately provided false address information to their employers, as they were residing in overcrowded units."

MOM stressed that employers have an obligation to ensure their foreign workers' accommodation meet regulatory requirements, and are accountable even when the workers source for their own accommodation.

"(They) must verify that the addresses provided by the workers are correct. Examples of verification measures include physical visits to their workers' place of residence and having sight of signed tenancy agreements," it said.

Affected employers said the usual practice is simply to give such foreign workers a housing allowance, and have them find accommodation on their own.

Once the worker secures a place to live, said Chin Wah Paints director Alvin Chan, he gives the address to his employer, who will then register it with the authorities.

"Our factory is in Jurong, and the address that our worker gave us was also in Jurong," Mr Chan said. "It didn't raise any red flags."

Tek Guthrie general manager Khang Gip Meng said: "The company has no way to check if every foreign worker is living at the address they gave us. We cannot go and knock on all their doors."

Neither firm had any idea that their workers were registered under fake addresses until they were alerted by MOM. Both reprimanded the workers involved.

In a strange twist, Mr Khang subsequently looked up his own Paya Lebar home address in the system - only to find that he was a victim himself.

According to online records, one foreign worker had been registered under his address since May last year.