Contaminated Dumex infant milk used at KKH and NUH between Aug 1 and 20: MOH

SINGAPORE - Infants under six months of age admitted to KK Women's and Children's Hospital (KKH) and National University Hospital (NUH) between Aug 1 and 20 may have been fed contaminated formula milk while in hospital, the Health Ministry said in a statement on Tuesday night (Aug 21).

Dumex's Mamil Gold Infant Milk Formula - Stage 1 (850g), which is marketed for infants up to six months old, has now been pulled from the shelves after samples tested positive for Cronobacter sakazakii bacteria, the Agri-Food and Veterinary Authority (AVA) said in the recall on Monday (Aug 20).

MOH was informed on Tuesday that that formula from the implicated batch had been used at the two hospitals, which are contacting parents and caregivers of patients who may have received the infant formula to advise them on what to do.

No cases of Cronobacter infection associated with the consumption of formula milk have been reported to MOH this year, it said, adding that it has advised all public and private paediatric hospitals to cease the use of the implicated product, and to notify the ministry of suspected cases.

Products from the recalled batch expire on Sept 11, 2019, and can be identified by the batch number 09117R1 printed on the lid.

While rare, infections from the bacterium - which can survive dry conditions, such as dry food like powdered milk - can be fatal to newborns as it can cause meningitis or sepsis.

Infants with Cronobacter infection, which can be treated with antibiotics, may show symptoms such as fever, crying, poor feeding or lethargy, while some may also develop seizures, a spokesman said. The incubation period typically ranges from four to nine days, but could be up to 21 days.

This is the first time a formula milk product has been recalled for failing to meet AVA's food safety standards and requirements, it said in response to queries.

As a precautionary measure, all new consignments of Dumex infant formula products manufactured in Malaysia will be subject to the AVA's hold-and-test regime. This means that imported products cannot be sold until an inspection and tests have been passed, which can take 10 to 16 days. 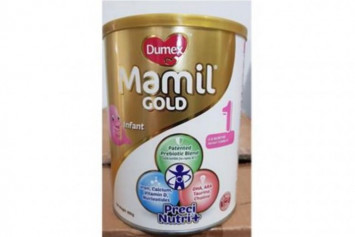 Under the AVA's food safety surveillance programme, certification of food safety and quality is obtained prior to import, and importers that consistently meet standards and requirements are subject to routine surveillance and sampling.

In response to queries, Danone Dumex said that the affected batch consists of 4,200 tins imported from Malaysia, which have been on sale islandwide since January.

The majority of these have been purchased without any reports of incident, while the rest have been pulled from the shelves, a spokesman said, adding that customers can exchange affected tins.

The firm tests every batch that leaves its factory and is working with the authorities to "identify the circumstances that gave rise to the positive samples", the spokesman said.

Paediatricians The Straits Times spoke to said that they have not seen cases of infection here, and there are only about four to six cases reported in the United States annually.

Dr Yang Linqi from Thomson Paediatric Centre said that formula milk can be contaminated by exposure to the environment during the packing process, for example.

Dr Ong Eng Keow, a paediatrician and neonatologist at the International Child and Adolescent Clinic in Mount Alvernia Hospital, cautioned that formula milk can also be contaminated during preparation, if proper hygiene procedures are not followed.

"Contamination can happen even after a tin of milk powder has been opened... bottles and teats should be well-sterilised, and the temperature of the water should be above 70 deg C during preparation to kill bacteria," said Dr Ong.

Supermarkets said that all products currently on shelves are safe for consumption, and that they will issue refunds to customers who had purchased the affected tins from their stores.

A spokesman for Dairy Farm said that Cold Storage and Giant were informed of a precautionary recall of the Mamil Gold infant milk formula on Aug 14, and 162 tins from the affected batch were removed from stores the same day.

Customers who purchased tins from the affected batch at Cold Storage or Giant can approach any of their stores for a refund or exchange with proof of purchase, the spokesman said.

Parents on Tuesday (Aug 21) expressed frustration at Danone Dumex's response, with some taking to Facebook to complain.

Civil servant Jayson Tsu, 33, said that he bought a tin of the recalled batch to supplement breastfeeding for his three-week-old son and has been unable to contact Dumex through its hotline.

"I have completely lost faith in their product... the 2008 China baby milk powder scandal still lingers on many of our minds," said Mr Tsu, referring to milk powder tainted with melanine that left six children dead and thousands more ill in China.

Dumex is the fourth-most popular brand of formula milk in Singapore, according to market research provider Euromonitor International, with $18.8 million in sales last year (2017).