Soon Xian Feng, who threw eggs on the floor outside his victims' flat among other acts, pleaded guilty to one count of harassment on Dec 23.

SINGAPORE - A man relentlessly stalked two residents of a flat from February to July this year after the pair rejected his gift, a district court heard on Thursday (Dec 23).

Soon Xian Feng left cigarette butts near their main door and threw eggs on the floor outside their unit.

On one occasion, he left two letters outside their flat, asking them to leave their window blinds open because he wanted to see what they were doing at home.

The two victims cannot be named owing to a gag order to protect their identities. Details about them have also been redacted from court documents.

The 21-year-old Singaporean pleaded guilty on Thursday to one count of harassment.

He also admitted to an unrelated charge of entering a third victim's flat to steal $150.

Deputy Public Prosecutor Chng Luey Chi said that Soon had left a package containing two jerseys and a jar of cookies outside his victims' unit some time in February.

Read Also
'This will go on forever': Ex-NUS student admits to threatening woman he was stalking 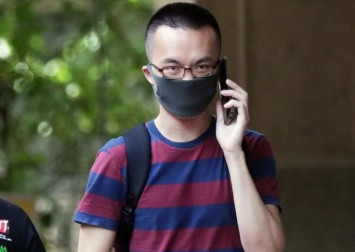 An accompanying letter stated that he wanted to befriend them. But the pair returned the items to Soon's father. Feeling upset over the rejection, Soon started stalking the pair soon after.

On Feb 24, he took down some Chinese New Year decorations that were placed outside their unit.

He continued to harass them between April and July.

Soon also took items such as footwear, a door mat and a parcel from outside the unit and tossed them down a central rubbish chute.

Court documents do not state what happened next but he was charged in court earlier this year.