PM Lee Hsien Loong speaking in Parliament during the debate on the Committee of Privileges report on Feb 15, 2022.

SINGAPORE - For Singapore's system to work, people must be able to respect the institution of Parliament and trust its members, processes and proceedings, Prime Minister Lee Hsien Loong said on Tuesday (Feb 15).

Without this critical trust in the apex institution of Singapore's democracy, the system cannot work, he said in his speech during the debate on two motions related to the report by Parliament's Committee of Privileges on untruths spoken in the House by former Workers' Party (WP) MP Raeesah Khan.

That is why the right norms of behaviour among MPs have to be guarded carefully, foremost being to tell the truth always and to do right by Singapore, even when - and especially - if it is hard or awkward, he said.

"If something goes wrong, or something wrong has been done, own up and take responsibility - do not hide, dodge, or spin further lies, to obfuscate and cover up the original fib," Mr Lee said as he called on all MPs to vote with their conscience on the two motions.

The first motion calls on the House to agree with the committee's finding that Ms Khan was guilty of abusing parliamentary privilege by lying in August and October last year, and for her to be fined $35,000.

The second motion calls on Parliament to agree to refer Workers' Party (WP) chief and Leader of the Opposition Pritam Singh as well as WP vice-chair Faisal Manap to the Public Prosecutor.

Calling integrity the linchpin of democracy, Mr Lee said that with Singapore heading towards a more contested political landscape, the competence and honesty of the Opposition is no longer an inconsequential matter.

"The question of 'What are the right values and how should we uphold them?' becomes of fundamental importance for both the Opposition and the governing party," he said. 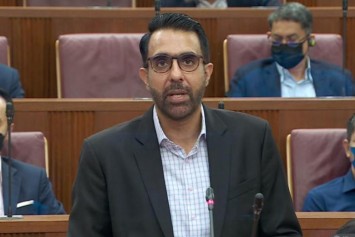 MPs must decide what Parliament will do about the untruths repeated in the House, as well as about the senior leaders of the WP being found by the committee to have lied under oath in their testimonies.

"Can we pretend nothing happened? Or if that is too much to stomach, given the strong evidence laid out by the (committee), perhaps we lower our standards just a little, note that untruths were told, but argue that it was after all not so serious a lie, and no harm was done?" Mr Lee asked.

"If we do either of these things, we too would become complicit in dishonouring and demeaning Parliament."

Mr Lee said he was glad that the committee had come to the conclusion that Mr Singh and Mr Faisal should be referred to the Public Prosecutor for having appeared to have committed a criminal offence.

"It could have recommended that Parliament administer a token slap on the wrist, but that would show that we were taking a very serious matter rather lightly," he said.

"Worse, by lowering our norms, we would be telling Singaporeans that it is really not so bad for elected leaders to lie."

While Singapore is a high-trust society today, nothing guarantees that it will always remain one, stressed Mr Lee.

This is why the country has to steadfastly maintain high standards and ensure its leaders embody the right values, he added.

"Call out wrongs when wrongs arise, mete out punishment where punishment is due, preserve the sanctity of our institutions," he told MPs.

"Never take public trust for granted and never allow lies, half-truths and falsehoods to become the accepted norm in politics."

So long as the People's Action Party is the Government, Mr Lee said, it will not shy away from doing what is necessary uphold the right norms in Parliament and to imbue Singaporeans and their leaders with the values critical to sustain trust in the system that is critical to Singapore's success.

"With our lives and future at stake, everyone participating in the system must be held to the same standards. There can be no excuses, no double standards, and no pardoning of inexcusable behaviour, just because the offending party portrays itself as the underdog," he said.