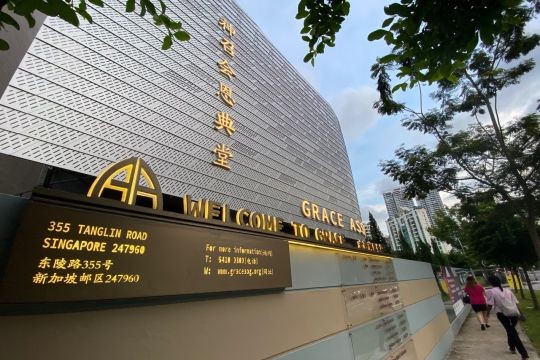 The Grace Assembly of God church's premises in Tanglin.
The Straits Times

SINGAPORE - Another four people have been diagnosed with the coronavirus infection here, with three of them linked to the biggest cluster - the Grace Assembly of God church.

The church has now been linked to 21 cases, or about a quarter of the total of 81 confirmed cases here.

The fourth person announced yesterday is also linked to previous cases – the anaesthesiologist and a Chinese national who is a non-medical contact of his.

The patient is a 35-year-old Malaysian woman who is a work pass holder here. She is a family member of the Chinese national. She became sick on Feb 12 and was on home quarantine as a close contact from Feb 15.

Before that, she had gone to work at FoodXchange @ Admiralty. Her job does not entail dealing with food, said the Ministry of Health (MOH) .

She was taken to the National Centre for Infectious Diseases (NCID) in an ambulance on Feb 17, and confirmed infected the same day.

Of the three cases linked to the church, two are administrative staff at two different hospitals.

One is a 57-year-old Singaporean woman who fell ill on Feb 9. She saw two general practitioners (GPs) on Feb 10 and 17. She was sent to the NCID on Feb 17 and confirmed to have the infection that afternoon.

Before she was warded, she had worked at St Luke’s Hospital. She had no interaction with patients there as she was doing administrative work. The hospital said colleagues who have close and frequent contact with the employee have been notified and have been working from home since Feb 17. The employee’s work area was also cleaned and disinfected on the same day.

The second case is a 38-year-old Singaporean woman who works at the National University Hospital (NUH) in an administrative capacity and has not interacted with patients since falling ill. She was confirmed infected on Feb 18 and is warded in an isolation room at the NUH.

The other new case linked to Grace Assembly of God church is a Singaporean man, 50, who was confirmed to be infected on Feb 18.

Most of the 52 patients still hospitalised are doing well, but four people are in critical condition and in intensive care.

The baby was evacuated on Feb 9. He had been warded in an isolation room since Feb 13 and had only mild symptoms. He was confirmed on Feb 16, but cleared of infection on Feb 18.

He is now well, but has been put back on quarantine with his parents.

As of noon Feb 18, a total of 2,486 close contacts have been identified and quarantined. Of these, 1,160 are still serving their quarantine while 1,326 have completed their 14 days of quarantine.