Coronavirus: 5 Singaporeans aboard the quarantined cruise ship in waters off Japan

SINGAPORE - Five Singaporeans are aboard the quarantined cruise ship docked off the coast of Japan which saw its number of passengers infected with the coronavirus jump to 61 on Friday (Feb 7).

Singapore's Ministry of Foreign Affairs told The Straits Times that all five have reported that they are physically well, and the Singapore Embassy in Tokyo is in contact with them to provide necessary consular assistance.

The Diamond Princess' passengers, comprising 2,666 guests and 1,045 crew members, are now in their third day of a two-week quarantine aboard the ship, which is docked in the waters off Yokohama.

Japanese officials announced 41 new cases on Friday, and said that those who have tested positive have been transferred ashore for treatment.

The 41 cases comprise 21 Japanese, eight Americans, five Australians, five Canadians, and one each from Argentina and Britain. None are in serious condition.

Passengers have been confined to their rooms since Wednesday, as Japanese health authorities continue screening those aboard. 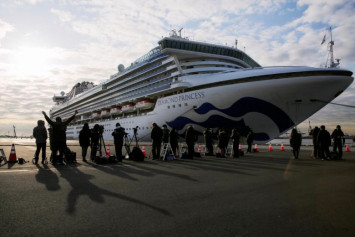 The Princess Cruises luxury liner had arrived at its final destination of Yokohama a day early on Feb 3, after it was discovered that an 80-year-old man tested positive for the virus after disembarking in Hong Kong on Jan 25.

A British couple who embarked on a 29-day cruise at the Marina Bay Cruise Centre in Singapore on Jan 6 told The Straits Times on Thursday that passengers were allowed to roam the ship freely for two days after being informed of an infected former passenger.

Some aboard have taken to social media to complain of cabin fever over the last two days, as many do not have windows in their rooms or contact with other passengers.

The Straits Times has sent queries to the Marina Bay Cruise Centre on how many passengers boarded the ship during its call in Singapore.