"Internally we will make sure that our processes are strengthened and our people involved all these know their roles well," said Minister-in-charge of the Public Service Chan Chun Sing.

SINGAPORE - Officials should not spread information prematurely as this could cause confusion and alarm during a crisis situation, said Minister-in-charge of the Public Service Chan Chun Sing on Sunday (Feb 9).

"Internally we will make sure that our processes are strengthened and our people involved in all these know their roles well," said Mr Chan, who is part of the multi-ministry coronavirus task force.

Mr Chan was responding to questions from reporters about a Health Ministry press release on Friday announcing Singapore was moving to the orange disease outbreak status.

While the news officially broke after about 5.20pm that day, an earlier version of the release had been leaked to the public several hours before and was circulating widely on WhatsApp and other channels.

Mr Chan, who is also Trade and Industry Minister, said officials should have the discipline and maturity not to share information prematurely.

But at the same time, in order to work fast during a crisis situation, information needs to be shared simultaneously with multiple agencies, he said.

Mr Chan shared that when Singapore switched its Disease Outbreak Response System Condition (Dorscon) to orange, all ministries had to step up measures.

The Government was able to execute changes within a few hours because it worked as a network where "everybody chipped in". 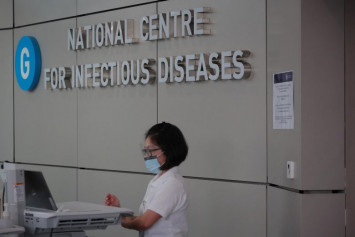 Working on a purely hierarchical process would slow down the Government's response to contingencies, he added.

"We should not swing to the other extreme because of this incident, and then therefore, slow down the whole process and in the end, fellow Singaporeans don't get the information in a timely manner," he said.

Speaking to reporters after a walkabout in Jurong West, the minister also shared that business continuity plans have kicked in for various ministries after a joint advisory to employers by the Manpower Ministry, National Trades Union Congress and the Singapore National Employers Federation on Friday.

Temperature checks and allowing staff to work from home were among some of the measures the advisory recommended following the shift to Dorscon orange.

Mr Chan said that all private sector employers and public agencies should adopt such measures, and shared that ministries have started to make preparations for possible split team arrangements.

"(This will) make sure that we can continue to operate round the clock to serve Singaporeans, notwithstanding the challenges of the virus," he said.