Coronavirus: Keep your guard up and stick to safe practices, say experts

Singaporeans should not be paranoid and should keep to guidelines such as wearing of masks, say experts.

As the number of Covid-19 community cases rises during phase two of the economy reopening, people should be wary but not paranoid, say health experts.

What is important is for the community to keep their guard up and continue practising good habits such as keeping a safe distance from other people, limiting social activities to small groups, and wearing a mask when outdoors, they said.

Yesterday, cinemas became the latest to resume business with safe management measures in place, following the reopening of food outlets for dine-in service and attractions such as wildlife parks.

Infectious disease expert Leong Hoe Nam told The New Paper: "The reopening of attractions will draw in cases, and no country has been able to avoid subsequent 'waves' of the disease after reopening."

He was referring to countries such as South Korea and Japan, which saw a resurgence in infections after easing of measures.

Australia's Victoria state also had a spike in community cases after measures were eased, and a six-week lockdown was imposed on the city of Melbourne and its suburbs last week.

Read Also
Pull your mask under your chin while eating out in Phase 2? Here's why you shouldn't 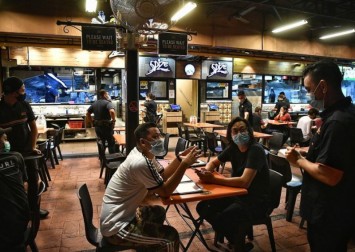 Dr Alex Cook, vice-dean of research at the Saw Swee Hock School of Public Health of the National University of Singapore (NUS), was more optimistic, saying: "I don't find the current situation (in Singapore) worrying.

"We had to reopen the economy at some point and we're well positioned to withstand any new wave of infections, as long as it doesn't get too big.

"I'd be very surprised if we can keep the daily number of cases at a low level indefinitely."

Other experts said that as long as Singaporeans remain vigilant, they do not foresee a huge spike in community cases.

Professor Dale Fisher of the Yong Loo Lin School of Medicine at NUS said: "The Government has laid out a framework for safe activities, and I would expect them to work if implemented well.

"We need not see numbers increase significantly. It really is now up to the community to follow all the guidance."

A new circuit breaker may be necessary if the number of cases overloads the health system, such as having more than 100 community cases a day or intensive care units reaching capacity limits, Dr Cook added.

"What might lead (to such situations) is if too many people let their guard down too much," he said.

Infectious diseases expert Paul Tambyah noted that there may be hidden reservoirs of infections, but he also thinks Singapore is unlikely to go back to circuit breaker mode.

Dr Jeremy Lim, an associate professor at the Saw Swee Hock School of Public Health, said "waves" of infections will arise only if Singapore is unsuccessful in identifying cases quickly and isolating them.

He added that people should be concerned but not paranoid and keep to guidelines such as wearing of masks.

"Some may have relaxed or become fatigued by the measures, but there is no choice. I do hope Singapore residents will encourage each other to do the right thing for themselves and the community," he said.