Joggers and walkers at Bedok Reservoir Park on April 15, 2020 at around 6pm. Some are wearing masks while others are not, even though it is mandatory except for those engaged in "strenuous exercise".

SINGAPORE - A debate has erupted over one of the latest circuit breaker measures that exempts those engaging in strenuous exercise from having to wear a mask while outdoors.

Some people have questioned the move, arguing that those who exercise vigorously typically breathe hard and could be exhaling more air droplets. Studies suggest that contact with infected air droplets is one way in which the coronavirus is transmitted.

But several experts interviewed yesterday said they saw the rationale for the move as exerting oneself while wearing a mask might not be safe. Allowing people to exercise and stay healthy would boost their immunity systems too, they said.

Read Also
People should wear a mask when going to the market or they will be turned away, says NEA 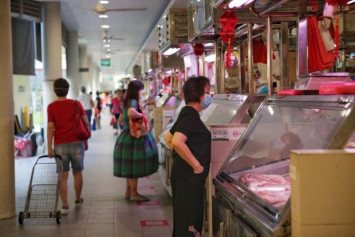 "When you put on a mask, there is resistance in breathing, making the exercise more strenuous and it can trigger a heart attack."

Dr Piotr Chlebicki, an infectious diseases specialist at Mount Alvernia Hospital, also told The Straits Times that there is a low chance of transmission of the coronavirus because people tend to jog and run outdoors, which is well ventilated.

Student Eric K, who runs six times a week at Sungei Jurong, tried exercising while donning a reusable cotton mask once, but found it "extremely suffocating". The student, who did not want to reveal his full name, had to remove it to continue his workout.

Everyone in Singapore is required to wear a mask when they are outside their homes now. The move came into effect yesterday.

But those engaging in "strenuous exercise" and children under the age of two are exempted.

Exercises such as walking and strolling leisurely do not fall under this category.

Read Also
Coronavirus: Mandatory for all to wear mask when out, except for kids under 2 and those doing strenuous exercise 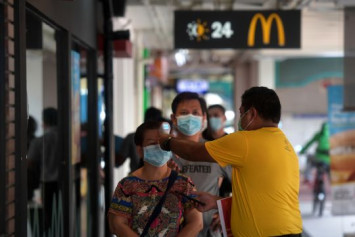 However, one is required to don a mask before and after a workout session to minimise the risk of transmission.

National marathoner Mok Ying Ren, who is also a doctor, said: "It makes sense because we breathe a lot harder, and if you harbour the virus, it's more likely for you to spread it if you are not wearing your mask."

Some, however, think that no exceptions to the mask-up when outdoors rule should be made, given the tightening of the circuit breaker measures.

One who took this view was a housewife, who wanted to be known only as Madam Lim. She said: "Those running without masks pass by lots of people. Now that the Government is giving out masks, everyone should wear them for the sake of all as the number of cases every day is increasing."

Others, however, think that there is no need to stop runners from exercising, and trying to stay fit. Dr Chlebicki, for one, sees no issue with people exercising as there is a low chance of them getting the virus if they run alone.

But he added: "It is a generous exception, but I hope people have some personal responsibility and common sense not to overuse the exception."

Experts suggested finding less crowded places to work out and going out early in the morning or late at night to avoid people. Dr Leong advised runners to keep a distance of 10m from people who are breathing heavily after exercising. 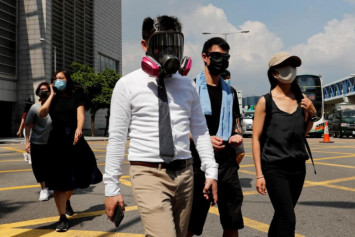 National marathoner Soh Rui Yong, who trains at East Coast Park and Bedok Reservoir several times a week, makes sure not to touch surfaces unnecessarily and maintains a certain distance between him and those around him.

But he feels that exercising during this period was still important.

He said: "If you stop (exercising), your immunity goes down and you'll be more susceptible to all kinds of illnesses, not just Covid-19.

"There has to be a balance... and this makes sense because they're trying to strike a balance between allowing people to continue a healthy lifestyle while taking safety precautions."