With expanded testing to include patients aged 13 years and older who have acute respiratory infections, the number of Covid-19 cases will go up, said Mr Lawrence Wong

SINGAPORE - The place where people are getting infected with Covid-19 has changed since the phase two reopening on June 19.

Workplace infections have risen from 22 per cent before phase two, to 36 per cent now.

Prior to that, 71 per cent of linked community cases were infected at home. This has dropped to 41 per cent between June 19 and July 5.

At a multi-ministry task force press conference on Tuesday (July 7), National Development Minister Lawrence Wong said of workplace transmissions: "That's one area where all of us can do our part to reduce transmission further."

He urged people who can work from home to continue to do so and for employers to allow this "to further reduce transmission".

He said: "Anecdotally, I hear some people saying that their bosses are now asking them to go back to work. Well, that should not be the case.

"Employers should still have their staff work from home. They should only come back to the office to work if there's a clear and demonstrable need to do so because employees need to use some specialised equipment or machinery at work."

It is a precaution all employers should take, so that if there is an infection in one person at the workplace, it will not cause a large cluster, he said.

He warned: "Should a cluster form in the workplace, we may very well have to ask the employer to shut down their business operations temporarily; and then require every employee to be tested. This will impact the business.

"So it's better for the business operator to take this seriously and put in place all the necessary precautions and measures."

Read Also
Working from home should be default mode in first 2 phases of reopening after Covid-19 circuit breaker: MOM 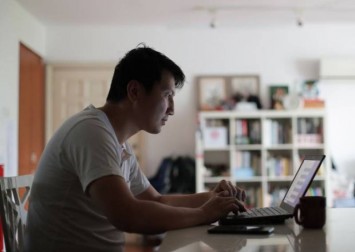 Another area the authorities are keeping an eye on are transmissions due to social interactions, which has doubled from 1 per cent to 2 per cent.

"We still put in place a lot of restrictions, they are helping. Many of us certainly would like to see these restrictions being relaxed over time, but if we want to do that, all of us have to be responsible and vigilant," he said.

Although the number of community cases has gone up, many of the people were already isolated as they were close contacts of a case. So there was no risk of them passing the virus to others, said Mr Wong.

Most of the new community unlinked cases were detected through routine testing, with almost three in five having no symptoms.

Half of these people are in the construction sector where workers are tested regularly.

Those who had no symptoms were also tested for antibodies which would likely indicate an old and not current infection. Almost half of the unlinked cases were positive for antibodies.

Health Minister Gan Kim Yong said at the press conference that the group that is cause for concern are people with symptoms and are unlinked to other cases.

They reflect cases with unknown sources of infection, he said.

"If this number goes up significantly, it may signal an increase in underlying community transmission."

With expanded testing to include patients aged 13 years and older who have acute respiratory infections, the number of Covid-19 cases will go up, he said.

He added that Singapore is not seeing a second wave of infections yet, "but the risk is always there".

This was why the MOH decided to test everyone in Block 111 at Tampines Street 11 where people from two households were found to have Covid-19, even though there was no interaction between them.

"We try to move fast, more aggressively, and do more than what is standard practice," he said. "I was very concerned that this could be a major outbreak for us.

"You could well imagine that a third or fourth household get infected, or another block infected, or workplace infected, then it could be an explosive spread."

#coronavirus #COVID-19 #Keep Up To Date