In a photo taken on Sep 26, 2018, hundreds of office workers, store employees and shoppers were evacuated from Tower B of Ngee Ann City after a pile of rubbish in a ventilation shaft caught fire.

A floor at Ngee Ann City Tower A has been cordoned off and the area is being cleaned after a DBS staff working there tested positive for the coronavirus.

He is the second employee from the bank to be infected and a close contact of the first case, DBS said.

In a notice issued to tenants on Monday (Feb 17), Ngee Ann City's management said the affected office space and floor have been closed off and common areas such as lifts and toilets are being deep-cleaned and disinfected in accordance with the Ministry of Health's guidelines.

General manager Lim Yen Li said in the notice: "We have immediately cordoned off the area where he worked and have initiated a (series) of deep cleaning processes in the immediate area as well as the common areas where the case was last seen.

"Special cleaning and disinfection have been done in the surrounding areas as a precaution."

Last week, DBS vacated 300 employees from one of its offices on the 43rd floor of Tower 3 at Marina Bay Financial Centre.

This was after a 62-year-old employee working there was confirmed to have contracted the virus.

The latest case, announced by MOH on Monday evening, is a contact of the 62-year-old. 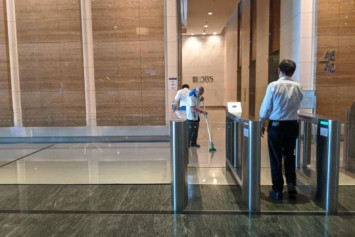 DBS said the new patient who was in close contact with the bank's first case was placed under quarantine last week, before he was diagnosed.

"We are rendering every support to him and his family during this period. We have also identified those who were in close contact with him, and are taking the same precautions as we did with the first case," said a spokesman.

"We have a framework for contact tracing, which we execute through a mix of physical interviews and data analytics. Through this, we are able to contact-trace up to three degrees of separation," she added.

The bank added that the satellite office at Ngee Ann City has been deep-cleaned.

DBS stressed that the health and well-being of employees and customers is a top priority and that the bank will continue to monitor the situation closely.

"Affected employees have been receiving support from the bank including having basic grocery packs delivered to them. A medical helpline, webinars as well as virtual doctors are additional resources that have been put in place for all employees," the spokesman said.

In its note to tenants, Ngee Ann City said: "Please inform us if you have any suspect case in your office or amongst your tenants/customers."