The Ministry of Health reported that the total number of people confirmed to have the coronvirus rose to 44, on Feb 9, 2020.

SINGAPORE - A 71-year-old grandfather and a Bangladeshi worker are among three new coronavirus cases confirmed here on Sunday (Feb 9), said the Ministry of Health.

The third case is a 54-year-old Singaporean man who works at Resorts World Sentosa.

All three have no currently known links to previous cases or recent travel history to China.

The total number of people infected here has grown to 43.

Six are now in critical condition and in the intensive care unit, up from four previously, said MOH in its latest update.

Meanwhile, four have been discharged, making up a total of six who have recovered.

The grandfather, Singapore's case 41, reported onset of symptoms on Feb 1, and had visited a general practitioner (GP) clinic on the same day, and again on 5 February. He sought treatment at Hougang Polyclinic on Feb 6, and at Tan Tock Seng Hospital's emergency department on Feb 7 where he was immediately isolated. He was confirmed to have the infection on Feb 8 afternoon.

Prior to hospital admission, he had visited Paya Lebar Methodist Church (5 Boundary Road), and a gathering at Braddell Heights Residents' Committee. He had also picked up his grandchild outside Pat's Schoolhouse Kovan (755 Upper Serangoon Road). He stays at Upper Serangoon Road.

The second case, case 42, is a 39-year-old Bangladeshi work pass holder here. He is also warded in an isolation room at NCID.

His symptoms surfaced on Feb 1, and he went to a GP clinic on Feb 3, and Changi General Hospital on Feb 5.

He was admitted to the intensive care unit at Changi General Hospital after a follow-up appointment at Bedok Polyclinic on Feb 7.

He was confirmed to have the coronavirus on Saturday afternoon, and was then transferred to NCID.

Read Also
From Wuhan tourists to Singaporean cabby: A detailed look at the 40 coronavirus patients in Singapore so far 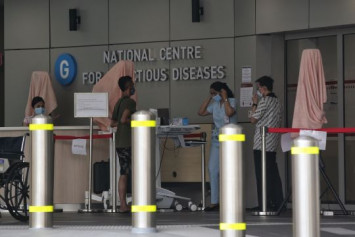 Before being admitted to hospital, he had visited Mustafa Centre in Little India, and stayed at The Leo dormitory in Kaki Bukit.

The third new case is a 54-year-old male Singaporean, who is warded in an isolation room at Sengkang General Hospital. He was in Malaysia on Jan 26.

His symptoms set in on Jan 30, and he visited two GP clinics on Jan 30, Feb 5 and Feb 6 before seeking treatment at Sengkang General Hospital on Feb 6.

He was warded in an isolation room on Feb 7 before he was confirmed to have the coronavirus on Feb 8 night.

Prior to being admitted to hospital, he had stayed at home at Fernvale Close, except for trips to seek medical treatment and once to work at Resorts World Sentosa.

On Friday, Singapore moved its disease outbreak response up a level to orange as the coronavirus spread further within the country, with more new cases of unknown origin announced.

Under the Disease Outbreak Response System Condition (Dorscon), orange is one step below red, which signifies an out-of-control pandemic. At orange, the outbreak is deemed to have moderate to high public health impact, but the situation is still under control.

Extra measures to reduce mingling in schools, tighten access to hospitals and limit large events have since been put in place.

After the outbreak response was raised on Friday, supermarket shoppers flew to stock up on items such as rice, instant noodles and toilet paper.

Government leaders have asked shoppers to remain calm, and assured Singaporeans that there are enough food supplies.

On Sunday, Trade and Industry Minister Chan Chun Sing said panic buying is unnecessary as the Government has a strong national stockpile and supply chain in place and local food manufacturers have also stepped up production.

Such each-man-for-his-own behaviour in a crisis also affects vulnerable groups of society and reflects poorly on Singapore in the world's eyes, he added.

Globally, more than 810 have been killed, mostly in China, with more than 37,000 infected worldwide.