Could Woman of the Year be PAP's new face in Ang Mo Kio GRC?

Could Her World's 2018 Woman of the Year make an appearance in the upcoming general election under the ruling party's banner? Perhaps so.

Ms Ng Ling Ling joined me for our e-MPS today, and we chatted with a couple of residents to understand their situation...

On April 18, the 48-year-old was introduced as Dr Intan's co-chair of the Social and Financial Resilience Committee for Ang Mo Kio GRC, shortly after stepping down from her position as the Director of the Ministry of Health's (MOH) Office for Healthcare Transformation.

Dr Intan said: "Ms Ng has extensive experience in the social and healthcare services sectors and would be able to help residents accordingly."

Ng will also be speaking in a webinar on staying resilient during Covid-19 for Jalan Kayu residents on June 20.

Before working at MOH, she was the managing director of the Community Chest (ComChest) and spearheaded donation efforts for charity. 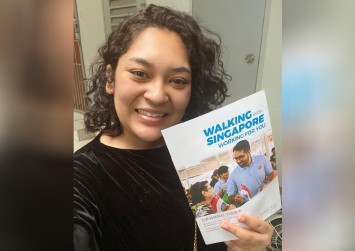 She was awarded Her World's Woman of the Year in 2018, which recognises women with outstanding achievements, after a secret nomination by her colleagues at ComChest.

"I hope this award will encourage more of my fellow Singaporeans to play a part in creating a caring and inclusive society, where no one is left behind," she said at the time.