Couple on motorcycle flung into air during crash on AYE

The impact caused the rider and his wife, who was riding pillion, to be flung into the air. The man landed on the roof of the car.

A motorcyclist and his wife were injured after they were flung in the air during a collision with a car on Sunday morning.

The accident occurred as a car in front of the motorcycle was changing lanes on the Ayer Rajah Expressway (AYE) towards the Marina Coastal Expressway (MCE) at around 11.30am.

The motorcyclist, 35, was unable to brake in time and collided into the rear of the car, Chinese-language daily Lianhe Wanbao reported yesterday.

The impact caused the rider and his wife, who was riding pillion, to be flung into the air, and the man landed on the roof of the car. 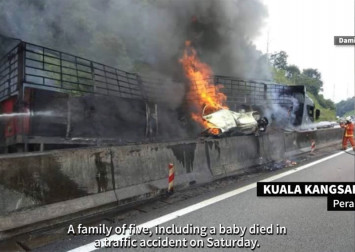 He managed to get up to check on his wife, also 35, who complained about her back hurting, Wanbao reported.

The accident was captured by the in-vehicle camera of a car behind them.

The couple, who are believed to be from Malaysia, were conscious when they were taken to Singapore General Hospital.