Couple saves elderly man who fell into sea at Changi Beach, wife breaks down after finding out why he was there

What was supposed to be a relaxing day out at the beach for one couple in Singapore turned out to be an eventful and tear-filled one, shared Queen Lexinda Royupa on TikTok Tuesday (Sept 13).

The 25-year-old posted a video on the platform the same day about how the beach outing ended up making her cry.

Royupa, a Filipino who works in Singapore as a customer service officer, wrote that she and her husband were out at Changi Beach Park when they saw an elderly man walking by the edge of the water, where there were "slippery rocks".

Before they could stop him, however, the 74-year-old man took a tumble and fell into the water.

@queenlexinda to Uncle - get well soon and we are glad to help you today. 🥹 #tiktoksg ♬ Heaven Knows (This Angel Has Flown) [2004 Demo Sessions] - Orange & Lemons

Speaking to AsiaOne, Royupa shared that the incident happened along the breakwater at around 9.50am, and the uncle was about "four to five metres away" from them when he fell.

The couple had been busy taking photos when Royupa's husband noticed the danger that the elderly man was in.

"My husband saw the uncle going down and rushed to him because it's really dangerous, but it was too late."

"Unfortunately, he went down so fast he hit his head on the rocks and fell into the water," Royupa stated.

Royupa shared that both she and her husband, who was visiting her from the Philippines, hurried down to rescue the man and gave him first aid.

"We calmed him down, gave [him] water, wiped his bruises on his head, ear and arms."

When Royupa asked the man why he'd "gone down so fast", what he shared made her heart break.

"He answered, 'I want to give flowers to my wife who died 10 years ago', then I burst into tears," Royupa shared.

At the man's request, Royupa and her husband helped him to throw the flowers into the water.

Royupa expressed how she was especially touched by the man's story as "knowing his purpose made me realise that true love exists, despite what he may have gone through".

She ended the video with a heart-rending message to his wife, "He loves you so dearly."

Royupa added that after the incident, the uncle continued to thank them profusely.

"He kept saying 'thank you to both of you. I might have drowned if you weren't here. You are very good'."

Royupa believes there was a greater purpose behind her and her husband being at the beach that day, writing, "God has a purpose why I took leave from work. For us to be an instrument to save someone's life."

The couple stayed behind to talk to the man and made sure he was fine before they parted ways.

In the comments section to the TikTok video, netizens were similarly touched by her story, with several commenting that it brought tears to their eyes.

Most agreed that it was a lucky thing that the couple happened to be around when the man fell.

Royupa replied how she was glad she was too, as  "there was really no people in that area, except me and my husband [sic]". 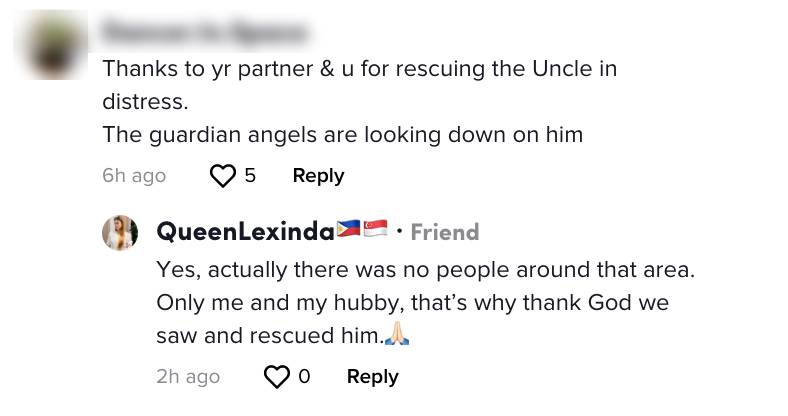 In a reply to a comment which thanked them for helping the man, she wrote.

"The sense of fulfilment right after helping him made our day."

Royupa hopes that more people will have the compassion to help others in need, especially if that person is alone.

“Spread kindness wherever you go. You might save them from any accidents, or from depression and sadness. Never underestimate the difference we can make in the lives of others.”