A man and woman who were seen kissing and having drinks at a public bench at Upper Boon Keng Road on Tuesday (Apr 14) were each fined $300 for breaching safe distancing measures.

A Stomper alerted Stomp to the incident and shared photos and a video of the couple sitting at the bench near a barbeque pit that had been cordoned off with red and white tape.

"The police arrived at 9.10am after several calls from different neighbours," she said.

In response to a Stomp query, the police said: "On Apr 14 at 8.38am, the police received multiple calls from a member of the public who informed that two persons were sitting on a bench that had been cordoned off at Block 8A Upper Boon Keng Road, as part of elevated safe distancing measures. 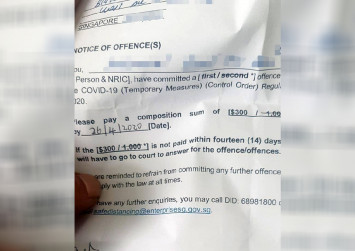 "When the police officers arrived, they found a 20-year-old man and a 19-year-old woman sitting on the bench within the cordoned area.

"They were each issued a composition fine of $300 for breaching safe distancing measures under the Covid-19 (Temporary Measures) Act 2020.

"They were advised to adhere to the measures, and left the area thereafter."