A screengrab from a news report showing the body of the baby girl being taken away.

SINGAPORE - A couple from Singapore are being investigated by Taiwanese authorities for allegedly dumping the body of a newborn baby girl in a recycling bin.

Taiwanese media reported last Thursday that the baby girl's body was found wrapped in a garbage bag early on Tuesday by an employee from a recycling company, who had been sorting through the trash.

The bag had been carried by a garbage truck travelling from Taipei to Xindian.

According to Taiwanese news channel Focus Taiwan, local police believe that the body of the girl was disposed of shortly after her birth in central Taipei.

She was found with her placenta and umbilical cord still intact. 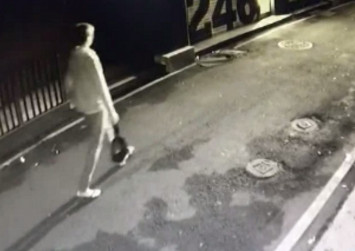 The police reviewed footage from cameras along the route of the garbage truck and said that a man in his 20s had wrapped the body in a black plastic bag and thrown it into a container for kitchen waste at around 3am on Tuesday.

They added that members of the public who claimed they had seen the man said he spoke in Mandarin with a "foreign accent".

The man reportedly checked into a hotel "popular with South-east Asian visitors" with a woman in tow, but left on Tuesday afternoon, before authorities could locate him.

Another Taiwanese news outlet, TVBS News, identified the woman as a 24-year-old from Singapore, and said the pair had flown in to Taiwan from Singapore on Feb 19.

In response to queries, the Singapore Police Force (SPF) said on Sunday that they have been in touch with the Taiwanese authorities.

SPF added that they are waiting for an official request from their Taiwanese counterparts on the assistance they need.

"We are unable to comment further as in investigations by the Taiwanese authorities are ongoing," an SPF spokesman said.

The Straits Times understands that the Ministry of Foreign Affairs is aware of the case.

Speaking to Chinese-language paper Shin Min Daily News over the phone on Friday, the man at the centre of the case denied that his girlfriend was pregnant and had given birth in Taiwan.

He also said that he had not left the hotel to throw the bag away at the time.

Similarly, the girl told Shin Min over the phone that if she were pregnant, she would not have been able to board the flight.

The man's parents also told the newspaper that their son and his girlfriend were indeed in Taiwan for a holiday, but they did not know if she was pregnant.

His parents added that if their son was found to be involved in the case, he will have to bear the consequences of his actions.

On Sunday, Shin Min reported that the man and his girlfriend have not returned home since their trip and have remained uncontactable by their family members.