SINGAPORE - A message circulating online is wrongly suggesting that the Government had quietly shifted the "retirement payout age" from 65 to 70, the Central Provident Fund Board said on Saturday (Jan 19).

The payout eligibility age for the Retirement Sum Scheme is 65 for those born from 1954 onwards and this has not changed since it was announced in 2007, it added.

The CPF Board was responding to a message which recently went viral on social media, claiming that the Government had surreptitiously raised the payout age from 65 to 70.

The confusion was in relation to a letter CPF sends to its members who are approaching their eligible payout age.

A sentence in the letter said that "no action is required if you wish to start your payouts at age 70", which gave some members of the public the impression that the payout age was moved to 70.

Responding to media queries, a CPF Board spokesman said the letter was sent to CPF members to inform them that they can start their monthly payouts by completing an application form with their bank account details or to apply online.

"They can apply to start their payouts any time between the ages of 65 and 70. If they do not wish to start payouts before age 70, they need not do anything" and "members who defer the start of their payouts will benefit from getting more retirement savings with the attractive interest that they earn on their CPF savings," said the spokesman.

You may have recently come across social media posts and messages that claim that the Government has quietly shifted the...

If CPF members do not take any action, Retirement Sum Scheme payouts will automatically start at the age of 70.

The spokesman said the CPF Act was amended in 2016 to allow for this automatic payout arrangement, which took effect in Jan 2018.

The CPF Board said that before this, some members did not start their monthly payouts even after age 70, as they did not apply to start their Retirement Sum Scheme payments.

The automatic starting of payouts at age 70 " helps to simplify the activation process for members so they can start to enjoy a retirement income from their CPF savings," said the spokesman. 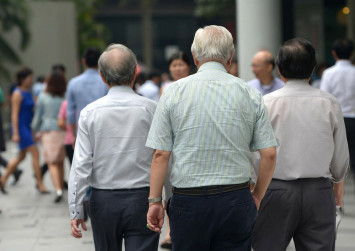 Retiree Johnny Wong, 66, said the way the Retirement Sum Scheme is administered could be made simpler.

Payouts should be automatic when an individual turns 65 years old, and he can have the choice to opt out if he does not want the payout yet, Mr Wong added.

"There may be some who are illiterate or who may not understand how the current scheme works," Mr Wong said.