SINGAPORE - The last team to arrive for this weekend's International Champions Cup (ICC) finally touched down on Saturday (July 20) and Cristiano Ronaldo's patient fans were rewarded when the Portuguese star made his much-awaited appearance at the Swissotel The Stamford.

Despite waiting for over four hours, the fans still accorded the superstar and his Juventus teammates a rousing welcome as they entered the hotel after disembarking from the team bus.

Ronaldo was flanked by two rows of adoring fans as he strode into the hotel, giving a thumbs up to supporters but not stopping for any pictures or autographs.

Newly-installed manager Maurizio Sarri, who has moved to Juventus after a season at Chelsea, looked relaxed as he stopped to sign autographs for fans and pose for photos.

Juve's supporters had kept an orderly but enthusiastic vigil outside the Swissotel since about 8.30am. The team had been due to arrive at the hotel about 9.45am but their flight was delayed and they only arrived nearly three hours later. In a generous gesture, the hotel had served the supporters - who had been waiting in the heat - water to quench their thirst. 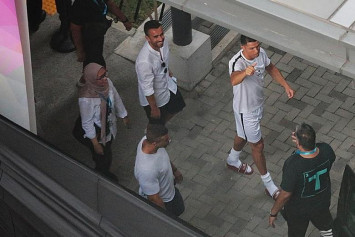 New signing Matthijs de Ligt, 19, Adrien Rabiot and returning former captain Gianluigi Buffon was not among the players at the hotel as they had been dispatched to a meet-and-greet session in Resorts World Sentosa.

Sean Lim, one of the fans at Swissotel, said: "Cristiano Ronaldo caught my attention when he won the Champions League with Real Madrid. I've been here since 8am to get a good spot so I can get my jerseys signed. I wasn't able to catch him last year so hopefully he'll finally sign my jersey."

Juventus are among the four teams that will feature in this weekend's ICC matches at the National Stadium.

Singapore marks the first destination for the Turin side as they begin their pre-season summer tour which includes stopovers in Nanjing, Seoul and Stockholm.