Crowds throng wet markets around Singapore ahead of CNY

The shoppers at Chong Pang City Wet Market were trying to keep a safe distance from each other.

The Straits Times was at the wet markets in Kovan, Chong Pang and Potong Pasir on Tuesday morning (Feb 9) and some customers said they had to queue for more than two hours.

Safe distancing measures did not appear to be observed in some queues.

When ST visited the Kovan Market and Food Centre at Block 209 Hougang Street 21 at 10am, a queue of about 250 people had formed from the market all the way to Kovan MRT station, about a three-minute's walk away.

Customers said they had been queueing for between one and two hours.

A customer, who wanted to be known only as Madam S. Koh, 60, had been queueing for about 1½ hours and said this was the first time she had seen such a long queue in more than 50 years. 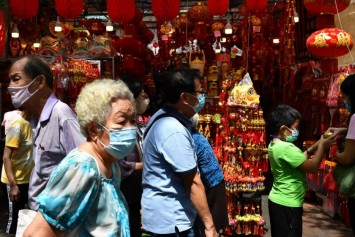 She said: "I'm not surprised, it's quite expected. CNY is coming. I think people are doing last-minute shopping."

Ms Sera Ho, 62, who works in a legal firm, said the queue was not so long when she visited the market last Saturday.

Ms Ho, who usually spends about an hour to do her shopping but took three hours today, said: "The queue is very long because of safe distancing. They're controlling the crowds so there aren't that many people inside."

Customers told ST that officers from the National Environment Agency were managing the crowd inside the market.

An employee from the Aljunied Town Council, who was helping out with crowd control, said around 120 people were allowed into the market at a time.

Ms Doris Lau, 58, who lives in Punggol, said she had been queueing for an hour since 9am.

She added: "I wanted to turn back, but I have groceries to top up."

She said some items she wanted to buy, such as fishballs, had sold out.

Housewife Theresa Tan, 73, said she might visit the market in Ang Mo Kio instead of Kovan tomorrow to avoid the queue.

She said: "This is the first time I have queued from the MRT station. I don't know why today is so special."

When ST reached Chong Pang City Wet Market at 9.30am, there were about 95 people in the queue.

About six crowd controllers were ensuring that customers adhered to safe distancing measures.

Customers had to scan SafeEntry QR codes before being allowed to enter the market and were trying to keep a safe distance from one another.

The crowd controllers told ST that only 150 patrons were allowed inside the market and that the barriers would be lifted at 11am.

Inside, ST saw a safe distancing ambassador patrolling, together with a crowd controller. 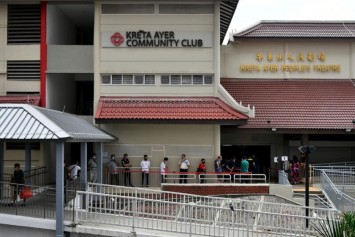 Crowd controllers were also stationed at each exit, ensuring that members of the public did not jump queue to enter the market.

Accounts officer Neo Bee Leng, 46, who waited about an hour with her elderly mother to enter the market, said that in previous years, the market would be packed and people would have to push one another inside the market.

She was concerned about the crowds, especially for her elderly mother, but said she would try to ensure they kept a safe distance from one another.

Mr Kelvin Yuen, 50, who owns a fruit stall in the market, said that in previous years, the market would be packed at around 10am. But this year, the crowds have reduced by about half.

When ST visited at 9.30am, customers were seen brushing past one another inside Jackson Market Shop while more than 20 customers queued to pay without observing safe distancing measures.

When asked why she was doing her marketing now and not earlier, Ms Rooba Chevi, 27, who works as a student care teacher, said: "It was hard to buy earlier as I work on weekdays and the weekend (crowd) is worse."