An aquarium shop lost almost a day's earnings after a customer allegedly put a toxic substance into a fish tank.

Mr Ng Him Yick, 41, the owner of Glassbox Aquarium in Boon Keng, told The New Paper the alleged culprit had entered the shop close to 9pm last Tuesday.

The shop's closed-circuit TV (CCTV) footage from the night shows a man entering the shop and loitering for a brief moment before throwing something into a tank containing about 40 to 50 freshwater tropical fish.

Mr Ng, who has been running the business for about two years, said: "I was busy attending to a customer so I didn't notice it at first. One of the customers alerted me and said there was something wrong with the water in one of the tanks."

The water in the tank had turned cloudy and was emitting a strong toxic smell. 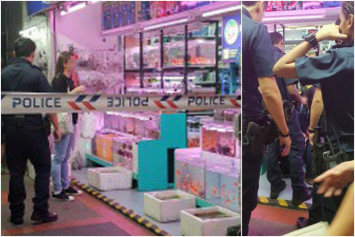 Mr Ng quickly drained the tank, but by then, only two fish were alive. He spent the night cleaning up and made a police report the next day.

Mr Ng said the tank contained high-value fish and estimated he lost anywhere between $400 and $500 from the incident.

"It's really a shock to me because I don't know why someone would do something like this. We have no disputes with anyone," he said.

Mr Ng said the customer, who looked to be in his 50s, first came to the shop about two months ago and subsequently would pop in at least once a week.

Mr Ng posted the CCTV footage on the shop's Facebook page, along with an appeal for more information on the man.

"We're just a small business and it's very sad that someone would want to attack us like that," he said. "We're just afraid he will come back and do something like this again because what he did really had an impact on our business."