One of the cyclists, believed to be the one who hit and dislodged the side mirror of the lorry in Saturday's incident, snatched the phone away from the driver.

SINGAPORE - The lorry driver and cyclist who were involved in an altercation in Pasir Ris on Saturday (Dec 22) have been arrested in relation to the case.

Meanwhile, a second video showing the aftermath of the altercation has gone viral after it emerged on social media on Monday morning.

Monday's video shows a confrontation between three men - the two cyclists and the lorry driver - on a grass patch, presumably near where the original incident occurred.

The lorry driver can be seen holding his mobile phone and appearing to be filming or taking photos of the two cyclists.

One of the cyclists snatches the phone away, before gesturing repeatedly at the lorry driver. The phone is eventually returned to the driver.

The cyclist who took the phone away is believed to be the one who hit and dislodged the side mirror of the lorry and was subsequently knocked over by the heavy vehicle on Saturday.

The Straits Times reported earlier that the police were alerted to the accident, which took place at the junction of Pasir Ris Drive 3 and Pasir Ris Rise, at 11.53am.

The earlier video, also posted by Roads.sg, has chalked up 2.1 million views since it was posted on the day of the incident.

The original video shows one of the cyclists riding in the middle of the lane in front of the lorry, leading the lorry driver to honk at him twice.

The cyclist stopped at the traffic junction in front of the lorry and continued to obstruct the vehicle even as it moved away from the junction.

Read Also
Cyclist hits lorry's side mirror, gets knocked over in Pasir Ris 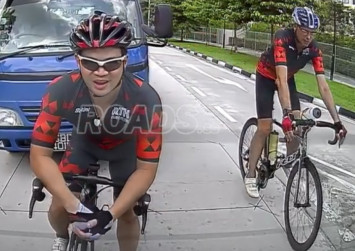 He later moved to the left of the lane but hit the side mirror of the lorry as he was doing so.

The lorry driver then swerved towards the cyclist, knocking him off the road and onto the grass next to the road.

The lorry driver told Lianhe Wanbao that he had been attempting to overtake the cyclists when he knocked into the cyclist.

He claimed that he swerved left as he heard a sound and thought he might have hit a taxi to his right.

He added that he had no idea that videos of the incident had been taken, or that they had become viral.

"I had gone out to get a new side mirror installed for $15. When I got home, I mentioned the incident only to my wife. I did not know it would attract such debate," said the 57-year-old.

The incident sparked a lot of discussion on social media, with many ST readers weighing in on the matter on its Facebook page.