Audrey Tay May Li, 45, the daughter of the founders of luxury watch retailer Hour Glass, will start her jail sentence for drug abuse in April after her appeal was dismissed by the High Court on March 15, 2019.

SINGAPORE - Audrey Tay May Li, 45, the daughter of the founders of luxury watch retailer Hour Glass, will start her jail sentence for drug abuse next month after her appeal was dismissed by the High Court on Friday (March 15).

In October last year, Tay was sentenced to 22 months' jail for repeatedly abusing drugs for two years. On one occasion, she had turned up intoxicated for a psychiatric assessment at the Institute of Mental Health.

The former public relations consultant, who is divorced, was arrested in August 2015 after she drove into a traffic light pole while under the influence of ketamine.

She pleaded guilty to her drug and traffic offences last year.

On Friday, Tay's lawyer Eugene Thuraisingam argued for a lighter jail sentence or probation, in lieu of the 22-month jail term. 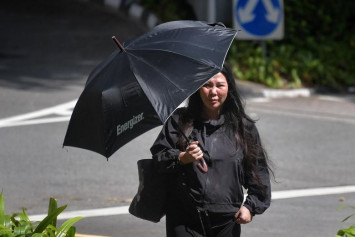 Citing recent amendments to the Misuse of Drugs Act which would see "pure drug abusers" channelled to rehabilitation, Mr Thuraisingam said it is clear evidence of a change in the social consensus on how drug offenders should be treated.

Under the Act, repeat drug abusers who do not commit other crimes would be channelled to the prison-run Drug Rehabilitation Centre, instead of being imprisoned in jail.

Given these changes, the paramount sentencing consideration should be rehabilitation instead of deterrence, said Mr Thuraisingam.

"Drug users are in a large sense... victims themselves," he said, adding that a rehabilitative approach would be more suitable for Tay, a "pure consumer".

However, Deputy Public Prosecutor Terence Chua noted that Tay would not be considered a "pure drug abuser" as she was also convicted of a traffic offence for driving into the light pole.

It was also very clear, from all her medical reports, that Tay was a casual drug user and not an addict, said DPP Chua.

"All these are choices... (the case) is not exceptional," he added.

Judge of Appeal Tay Yong Kwang, in dismissing the appeal, also noted that the new measured policy towards drug offenders do not apply to her as her crimes were committed in 2015 and 2017. Offences are considered according to the law in force at the time when the acts were committed, he added.

He further noted that Tay's adjustment disorder and depressive disorder should not be considered mitigating factors.

"At best, she could only assert that her adjustment disorder and the events in her life at the material times coloured her judgement in the sense that despite knowing that what she was doing was wrong, she nevertheless decided to carry on," said the judge.

She will begin her sentence on April 15.