Days in ICU scariest of my life: Coronavirus patient in Singapore shares his experience

For an eternity, time stood still.

No matter how often he checked the clock on the opposite wall, its hands never moved.

Worse, he could not lift his own.

To prevent him from pulling out the tubes in his nose, mouth and hands in his delirium, Mr Raymond Koh was tied down to his hospital bed. That week in March, when he lay seriously ill with Covid-19, was the scariest of his life, he told The Straits Times.

A day after the 47-year-old bank IT manager found out on March 10 that he had been infected with the coronavirus, his oxygen levels started to drop. X-rays showed patches in his lungs. His temperature was fluctuating.

Doctors at Sengkang General Hospital told the father of a teenager he would be taken to the intensive care unit (ICU) immediately.

"My mind went totally blank," recalled Mr Koh. "I was nervous and fearful. I thought to myself, it's only when a person is in critical condition that he has to go to ICU.

"What will happen to me? Will I see my wife again?"

He feared the worst, as his own father had become critically ill and died in intensive care eight years ago.

A day after Mr Raymond Koh found out that he had been infected with the coronavirus, his oxygen levels started to drop....

Mr Koh's own ordeal began with a fever on March 1. He visited a clinic in Buangkok the following day, and then again on March 5. As his fever was still running high on the night of March 8, his wife took him to a second clinic in Punggol.

Mr Koh thought the persistent fever could be a case of dengue, but the doctor detected abnormalities in his lungs and decided to call an ambulance. He was taken to the emergency department at Sengkang General Hospital, and subsequent test results confirmed the Covid-19 infection.

It was a blow.

Mr Koh recalled: "I thought that if I was positive, a lot of people could be infected. I thought of my family, my colleagues, even people who were on the same train as me."

That evening, the contact-tracing team called to interview him.

He said: "They asked me who I'd met and what I'd done up to three weeks before. But I told them my routine was the same. I take the train to work at Raffles Place every morning. I go to Hong Lim hawker centre for lunch and sometimes dinner. I take the train back home in the evening. I did not meet anyone with (visible) Covid-19 symptoms."

Mr Koh, an employee of OCBC Bank, said his last working day at the office before he fell sick was Friday, Feb 28. He did not go to work the following week as he had five days of medical leave for his fever.

After he was confirmed with the infection, his wife and teenage son started their two-week quarantine.

Everything happened so fast after his diagnosis, he said. 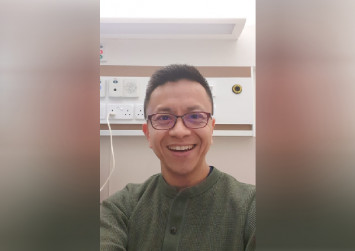 "Just before I was wheeled into ICU, I quickly sent a text message to my wife to tell her I love her and I love our son," he recounted.

"In ICU, I was given sedatives to facilitate the intubation procedure in order to be connected to a ventilator. I woke up one day later and found six tubes on me - one in my mouth, one in my nose, one on my neck and three on my hands.

Mr Koh wrote: "When is this going to end?"

A doctor replied: "You need to stay positive."

That night, his condition worsened. The pain in his chest was as if the virus was launching an attack inside him. "I was suffering. I was in a very uncomfortable position with my hands tied down to the bed and unable to move. I kept staring at the clock in front of me. It was 11pm and I told myself to sleep. I thought I slept for a long time, but when I opened my eyes, only 10 minutes had passed.

"I lay there, wide awake until the next morning."

Five days went by and, finally, there was some improvement in his lungs. He was told that the tube pushing oxygen into his lungs could soon be removed.

On the sixth day, a video call was arranged for Mr Koh and his family.

"Even though I couldn't talk as I still had the tube in my throat, I felt so relieved to see my wife and son," he said.

Tears flowed during the short 10-minute call. "I gave them a thumbs-up, to tell them that I was doing well," said Mr Koh.

"My wife forwarded a lot of messages to me and I was so comforted to see how much support my bosses and colleagues had given them."

OCBC Group chief executive officer Samuel Tsien called his wife to check in on her, and told her that she is "part of the OCBC extended family". They also bought groceries for her and offered to bring her food daily during her quarantine.

"My handphone had hundreds of messages from friends who sent me their prayers."

Mr Koh's wife, 44, who declined to be named, said: "There was a lot of anxiety, especially when my son and I had to be quarantined and I couldn't be at the hospital with my husband, who was so sick.

"People came and left food outside our door as we couldn't go out to get our own food. It was the support from family, friends and colleagues that helped me through those two weeks."

After five days in ICU, Mr Koh was moved to an isolation ward until his discharge on March 19.

He has tested negative twice now for the virus.

"The experience let me see up close how the medical workers put themselves at risk to save lives. Every day, someone would say to me, you need to get well soon so you can go back to your family. They were so positive and their words of encouragement helped me survive this ordeal," said Mr Koh.

"I never thought I would get the virus because I don't go to entertainment venues or engage in outside activities after work. So don't assume you are safe. Anyone can catch the virus anywhere."