Singapore to see 45,600 retrenchments this year, GDP to contract 5.7 per cent: DBS economist

Retrenchments in Singapore could hit 45,600 this year with the economy in a "deep and protracted recession", as the country toils at containing the spread of the novel coronavirus with an extended "circuit breaker", a report from DBS Bank suggested on Monday.

Authored by the bank's senior economist Irvin Seah, the report said Singapore's gross domestic product (GDP) is now expected to shrink 5.7 per cent, with the services and construction sectors bearing the brunt of the "circuit-breaker" extension.

"Should Singapore fail in containing the outbreak, GDP growth could plunge to as low as -7.8 per cent," he said, calling 2020 the "darkest year" for the Singapore economy since its independence in 1965.

Singapore has seen a rapid rise in the number of Covid-19 infections in recent weeks, with the virus circulating among the migrant worker population. This has led to a suspension of all construction activities, with all workers in the sector put on Stay Home Notices.

"The implementation of the 'circuit breaker' in early April, and the extension to June 1, though necessary to contain the outbreak, will be a nail in the coffin for many locally oriented industries," Mr Seah said.

He is anticipating a "potentially deeper contraction" in the services sector, given that tourist arrivals have practically come to a standstill by mid-March. At the same time, consumer spending is likely to fall even lower in the coming months, given that the food and beverage and discretionary item segments all reported a 30 per cent drop in sales in February.

As the measures turned more onerous, so too is the corresponding drag on the economy, Mr Seah said, explaining why his 2020 full-year growth forecast was downgraded to -5.7 per cent from -2.8 per cent previously. 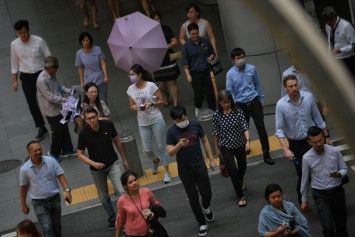 In anticipation of the economic fallout, the government introduced three rescue packages totalling S$68.8 billion, Mr Seah noted, adding that the economic pain could be even more acute without these measures.

However, despite these efforts, a significant number of jobs could still be lost as the economy dips into an unprecedented deep recession, he said.

"Companies may have to shed more headcount to bring manpower costs to be in line with the fall in earnings. In addition, some companies with weaker financial standings could go belly up," Mr Seah said.

"Many companies may crumble, and more jobs could be lost."

This means retrenchments could potentially rise to 45,600, nearly double his initial estimation of 24,500 from a month ago.

"Though resident workers account for about 62 per cent of the total workforce, retrenchments involving local workers will be disproportionately less due to policy measures aimed at safeguarding jobs," Mr Seah said, referring to the government's Jobs Support Scheme.

The scheme offers wage support of up to 75 per cent on the first S$4,600 of a worker's gross monthly pay for April and May, and at least 25 per cent for a further seven months, depending on the sector.

Mr Seah estimates that an estimated 24,800 residents could potentially be displaced, while foreign workers will account for the bulk of the retrenchments.

In a grim conclusion, Mr Seah said it will still be a long way before economic activities "resume normalcy", as any recovery will be tepid due to fear of a new wave of infections.

"Expect nothing less than an arduous path ahead," he warned.